A summer cold during the week of a Bentley convertible loan is not a good thing but it has saved me a small fortune.

Why? Well, the Speed’s 626bhp engine is massively thirsty, that’s why. Even when I try to drive at a sedate ‘Bentley-style’ pace the petrol gauge needle seems to be pulled relentlessly to the left.

Had I not been tucked up in bed with a box of tissues, I’m certain I could have burnt my way through a few hundred pounds keeping the Speed on the road. I’m averaging well under 20mpg.

And I know people who can afford £200K plus for a car aren’t bothered by fuel bills but I wonder if these big engined monsters are going to be consigned to the motoring history books before too long..

May 28 Fascinating how two fast and expensive British cars can polarise people. Last week’s Morgan Plus 8 is every bit as thirsty and environmentally unfriendly as today’s Bentley Speed.

Yet on the road, other drivers perceive the retro Morgan as a throwback to the glory days of motoring – when flat caps and goggles were the norm. They loved the old school shape and many waved as we passed.

The Bentley is the complete opposite. It may be manufactured in England too but drivers are induced into a road rage, serving up looks of contempt and pure loathing.

I suppose they automatically assume that I’m minted – and we all know how the Brits like to knock a success story. Of course, I’m not loaded but living with the GTC Speed would seriously hack me off if I had to deal with this every day.

The consolation for Bentley owners is that the Speed feel wonderful on the sumptuous inside, which is where it really counts I suppose. 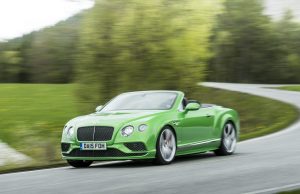 I can’t help thinking that incredible supercars like the Bentley GT Speed will soon be a distant memory. When I’m talking nonsense in a nursing home in 50 years time, staff will laugh at my memories of a ‘personal transportation device’ averaging 19mpg, costing £200k and sounding like a spaceship on lift off.

By then we will all be moved from A to B in pods. Driving a vehicle will be something from the history – what families go to watch at Bank Holiday Weekend track events around Silverstone and Brands Hatch.

The roar of a 12-cylinder engine will probably frighten children and remind grandad of when everybody owned a car, locked in a little house next to their home that was called a garage.

There isn’t an awful lot of time left to enjoy incredible cars like the GT Speed. The price puts it was beyond reach of the average man in the street but we should at least marvel at vehicles like this while we have them.

Times are changing, probably for the better but fans o the combustion engine need to enjoy it while they can…

My dog only growls at two vehicles – the local farmer’s tractor and the arrival of a Bentley GT Speed. The fastest GT money can be chucked at has a sensational roar in Sport mode.

The W12 engine even outperforms last week’s Morgan Plus 8 for naughty acoustics in the high street. It takes guttural gurgling to new levels and is seriously sexy.

Of course, it pumps out huge amounts of pollutant from those tailpipes too – 338g/km to be exact. Some might consider that V12 turbo something of a dinosaur but hell, does it sound good.

The cheaper V8 S model might be regarded as a better all-rounder and substantially more efficient but for balls out bravado, well, driving a Speed is like turning a victory roll over the CO’s control tower, full throttle in a Spitfire.

May 25 I can’t tell you the Morgan Plus 8 is value for money, or the fastest two-seater on the road for circa £90,000. It’s also ridiculously noisy at motorways speeds, leaks worse than the Labour Party and is a bugger to access, even with the roof down.

And yet after almost 1,000 miles of driving around Ireland, I can’t honestly think of a car that has given me so much pleasure, including any Porsche 911, Ferrari, Lambo or Aston.

If this sounds like a rather rash statement, you might want to consider what you want from a sports car. Is it a machine that cossets you in driver aids and help you clock 60mph in 0.1 of a second faster than the bloke’s car parked next to you?

Or would you like a machine that truly tests your driving skills, demands respect but will reward driver input by the bucketload?

All I can tell you after testing cars for 30 years is that the Plus 8 is, without doubt, one of the best cars I have ever driven… 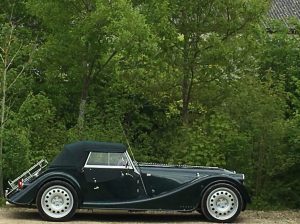 ‘It’s a kit car, right?’ Don’t you just love Americans… They assume because something is old and interesting, it can’t possibly be manufactured in a conventional way with spanners, tools and scuffed knuckles.

I’m in the car park at Ashford Castle, Cong. Ireland’s top country hotel was the location for the 1952 movie The Quiet Man. John Wayne’s bedroom was just down the hall from mine, and Ted Kennedy below.

So once I’ve informed the ‘noisy’ man that it isn’t a kit car and was actually hand-built by men in England, he’s even more impressed. I should forgive him because right now, Morgans aren’t sold in the US. It’s all to do with health and safety and will, hopefully, be resolved later this year after a change in federal law.

But the Yank likes the car, even though he’s convinced the roar from those four tailpipes comes from a V12. He especially likes the leather interior which, in truth, squeaks and rattles like hell on the road.

And the roads here are some of the best in the world for squeaky driving. The route from Westport to Cong is, well, ‘awesome’. Drive it now in a Morgan, before cars start thinking entirely for themselves…

May 22 There are cars that rub people up the wrong way. Count in that pack every BMW X5 ever built, the vehicle with a pointless personalised number plate, and any car with a Porsche badge. I guarantee it – nobody will let you out at a junction.

Morgan isn’t included. Everybody loves the little two seater – perhaps because it looks as if it comes from the pages of Wind In The Willows. Yes, I’ve become Mr Toad in tweed and goggles, parp-parp.

Well, no goggles actually but they would be useful. And the great thing about the Plus 8 is that nobody seems to realise it has a 4.8-litre monster under the bonnet. Let alone one built by BMW.

So my tour of Ireland has got off to a sound start. My lower back is suffering from the hard seats, my sat-nav has packed up (possibly the vibrations through the windscreen!) and it’s pointless turning on the Alpine stereo.

The only thing to do is drop the hood, don a silly hat and drive like Mr Toad…

May 20 There is a moment, after the initial rush of blood to the head, when you have to start living with a new vehicle. Motoring writers tend to ‘own’ test cars for a week – which means we rarely reach what in marital terms is called ‘post honeymoon’.

As much as I love the Plus 8, the Morgan and I would have been divorced within hours of our first encounter, if I had been looking for a long-term commitment, that is. Fortunately, I had no such intention when I made the booking months ago.

The Plus 8 is all about a weekend fling. Pulling on an inappropriate leather jacket, pretending it’s always sunny and using that 390bhp BMW lump to overtake anything and everything that gets in the way.

Like a pre-millennium Alfa Romeo, a modern-day Aston Martin and every Maserati ever built, the Morgan is beautifully flawed and often infuriating.

Yet if you seek the holy grail of passion and soul in a car, well, there aren’t many cars left like this stirring Plus 8 these days…

May 19 One of the men at the Morgan factory in Malvern, Worcestershire, has been making cars for 50 years. Every Morgan is hand-built and looks like it could have been driven off a Jeeves & Wooster film set.

All except this one – the mad, bad and rather pricey Plus 8.

Morgan has retained the retro look for the 8 but given it a modern twist, just like the Aero 8, which will also be re-launched in the coming few months.

We drove the Plus 8 last year and were blown away by a heady package of performance, fun and thrills that far outweighed the car’s shortcomings.

Today we have the 2016 model, with revised chassis and suspension, it’s really just an excuse to get our fix of Plus 8 while the sun shines. Or rather doesn’t , as it’s England in May.

That’s why Car Couture is off to Ireland this weekend where rain is virtually guaranteed. Will the Morgan’s rough edges and even harder ride drive me to drink – or will the thrill of the open road prove more intoxicating?

Join us for a long weekend on the Emerald Isle to find out….

If you want to race a Porsche from the traffic lights in an SUV then there’s only one choice. The T8 may be a high-sided whopper but it will embarrass a Boxster in a straight line – while carrying a sofa in the back at the same time.

Things become a little more blurry on the corners though. Despite that 316bhp turbo and supercharged 2.0 petrol engine, plus an 86bhp electric motor powering the back wheels, this hybrid sport version of the XC90 suffers from all the usual problems associated with a family mover.

I’ve no doubt the T8 will be a massive hit in the UK – but not because it’s a hybrid capable of more than 120mpg. No, for all its green credentials, the T8 will be bought by cool dads who want to squeeze as much performance as they can from their motor on a school run.

Unless they live in a city, I doubt any of them will ever plug the T8 in to the mains either, or speak of its potential fuel savings at dinner parties.

This is, then, the most unlikely Volvo ever built. A high performance seven-seater that you could sell to your eco friends and still throw about like a hooligan. Definitely one of the top ten cars of 2016 then.