Let’s get one thing clear from the start. The C5 is long overdue a major overhaul. It’s been around for eight years and, quite frankly, is starting to look it’s age.

Compared to a top spec Mondeo, it’s nowhere in sight. The big Citroen saloon may have been a minor hit in 2008 but now it’s like an 80s pop star – living off former glory.

First impressions? Well, the C5 is disappointingly dull to look at. And that’s from the outside and the inside. It’s totally unremarkable, especially in our test car silver. Yikes!

Apart from a funky, fixed steering wheel loaded with a mass of buttons – more on that in the days ahead – it’s all a bit spartan. Citroen would say uncluttered but the bonkers steering wheel blows that argument out of the water.

Last day with the 508 RXH. The big Peugeot estate has been on sale since 2012, although back then it was in diesel-electric hybrid form only. This erm, other version might look the same but it has none of the benefits of that Hybrid4 system.

Apart from the rufty-tufty body trim, it’s really just a two-wheel drive estate powered by Peugeot’s standard BlueHDi unit. I doubt you will ever get anywhere near the 68mpg claimed either.

Still, at least it looks that little bit different to the many BMW and Audi estate offerings out there. You won’t see many on British roads because at £30,000, it really doesn’t make any sense against far better competition.

If you are tempted, then pay the extra and get the proper hybrid.That’s actually a car with something to shout about.

My 508 has got the jitters. There’s a stretch of road I use near Stow-on-the-Wold to test every car I drive and the Peugeot estate just doesn’t like it at all.

There is also rather too much wallowing on the corners – it lacks the composure of a BMW 3 Series touring, against which it is firmly pitched at £30,000.

Sure, the RXH has more room on the inside but really I’d enjoy a better drivers car instead – it’s just rather dull, even with the ‘sport’ button engaged.

Tomorrow is press day for the Silverstone Classic event. The 60-mile route to the circuit will expose any issues the Peugeot hasn’t revealed this far…

I’ve been pondering all weekend who is going to buy the RXH. If you are French and live in France, then I imagine this car is aimed at you. As we know, the French would buy a broomstick if it had Peugeot, Renault or Citroen on the handle.

We haven’t bought British cars in vast numbers since, ooh let me see,  the 1970s? Forget all the Honda, Nissan, Mini and Toyotas built here, I mean proper British manufactured cars like Triumph and MG.

But a large Peugeot estate car with more frilly equipment than a French fancy – well, non. The last great Pug estate was the seven-seat 504 and they killed that off in the 1980s.

So, I wonder how many RXHs they actually sell in Angleterre? It’s a fine looking car with lots of standard kit but the bottom is is this – there are far better two-wheel drive estates than this for £30k. And they won’t lose their value at such an incredible rate either.

Am I the first to note that the Peugeot 508 RXH looks remarkably like the Audi A4 allroad?

No bad thing, of course. Just remember that despite the butch looks of the Pug, it doesn’t actually benefit from four-wheel drive. You need the more expensive hybrid version to enjoy that.

I can’t deny the RXH is  pretty car. The curves and lines give BMW’s estate range a run for its money.

Sadly, this being a Peugeot, it doesn’t have anywhere near the same badge kudos. So why is the RXH expensive?

I could buy a standard 3 Series or A4 estate for £30k. Both the Audi and BMW are much better drivers cars too…

After the madness of last week’s Jeep Renegade in orange, enter the positively restrained Peugeot 508 RHX – in white. Never have I welcome a blanco car so much!

So this is Peugeot’s £30k jacked up estate with a twist. That’s right, it’s a hybrid. Or is it?

Although it might look like the company’s chunky, electric-petrol Hybrid4, this version is front-wheel drive only and equipped with a 180bhp diesel engine.

So like the the two-wheel drive Jeep, the RXH is another pretender that doesn’t do what it says on the tin. 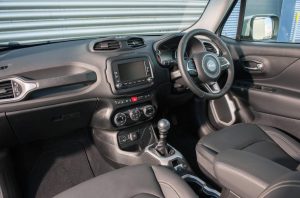 Decided to catch the train to London today. I just can’t face a five-hour return journey in the orange Jeep.

Believe me, I’m in touch with my inner ‘orangeness’ – it’s just that a combination of orange and Renegade is one Jaffa too far.

A car should be a joyous thing – something you long to drive when it’s parked outside your house.

My 1972 Land Rover is noisy, uncomfortable and draughty but I look forward to steering it 100 times more than the Jeep.

Sure, on paper the Renegade has plenty of kit and a heritage to match – despite being expensive.

It’s really a fake though. There’s more history and charisma in my BIC pen. The fact Jeep has played on the heritage card so heavily with this new Renegade really sucks.

I never thought I’d say this but honestly, go drive the hugely impressive Skoda Yeti instead. It’s a much better car.

I get the feeling the Renegade  might be more worthy of the Jeep badge equipped with the four-wheel drive set-up and a more powerful engine than our 1.6 test model.

Most people will opt for two-wheel drive and then discover the ride is bouncy and too firm. And the 1.6-litre is adequate rather than exciting. At least it pulls well from a standstill.

The standard six-speed gearbox is the one to go for – the twin clutch auto will likely rob the Renegade of any performance you can squeeze from that 120bhp power unit.

Oh, and while I’m on the positive, the steering is responsive and there’s little wind noise at high speed. The sound system on the Limited is a highlight too.

If there’s one, insignificant feature on the Jeep Renegade that sums up the ethos of this vehicle, it’s the footstep leading in to the back seat.

Foot step, running board – call it what you like. Except this isn’t a foot step. Despite being at ‘step’ height, it is actually just a piece of plastic trim, bolted on to give the Renegade a more macho look.

And I know it’s not a running board because it says in bold typeface ‘No Step!’ on the trim. I honestly can’t imagine a boisterous ten-year-old bothering to read that as he uses it for a springboard.

It’s all a bit pointless. Just like the splattered mud logo that replaces the red line on the rev counter. That’s going to annoy the hell out of you after about a nano second of novelty value.

Jeep is trying to been ‘too’ Jeep I fear. Concentrate on getting the basics right first…

Colin Rosie might be happy. The man who restores top hats at Spitalfields Market in London will be delighted to know Jeep make a car designed especially for his customers.

The Jeep Postvan (available in bright orange) has so much headroom that wearers don’t have to remove their hats when on the road. It’s tons more practical than the ‘squashed’ Range Rover Evoque, which is for flat cap owners only.

Of course, you pay a price for making a fashion statement in a top hat. Unlike the urban-cool Evoque (available now secondhand for £20k upwards), our £23,000 Renegade has the visual appeal of a Lego brick.

At least the Jeep makes other people happy. I know this because there were a lot drivers laughing at me as I tootled through the Cotswolds on the weekend.

So, there you have it. Buy an Evoque and leave your top hat at home. Or choose a Jeep Renegade and make people chuckle..