London was swinging to a new beat in 1966 and car manufacturers hoped to capitalise from the same feel-good vibe. The 124 Spider wowed audiences when it was unveiled at Turin Motor Show that year, looking every inch as cool as a Ferrari.

Pininfarina styling and a budget price made the soft-top an instant hit –just a little racier than the more ‘traditional’ MG, with a whiff of dolce vita about the tasteful design.

Fifty years on and Fiat has launched a new Spider that captures the same spirit. It shares a platform with the popular Mazda MX-5 – a car that also happens to be it’s main rival.

Both offer a very different driving experience, the Italian powered by a turbocharged engine that requires plenty of gear-shifts to extract the most fun. Like Fiat’s 500 city car, the bodyshell shamelessly harks back to a 1960s original.

To my eye this is no bad thing. The MX-5’s slit-eyed headlights and angular styling lacks the charm of the retro Fiat – although the Mazda’s 2.0-litre engine is more relaxed around city streets and has been the number one convertible for decades.

Spider strips open-top motoring back to the best of basics, although my Lusso Plus model has plenty of standard kit, such as sat nav, Bluetooth and a DAB radio. Heated seats might be just as important for open top winter jaunts around the West End.

The Fiat sports a decent sized boot for shopping, a cheeky rasp from the exhaust and an interior that feels very smart indeed. It’s just a shame the infotainment screen sits flat on the dashboard like a bolt-on afterthought.

I wasn’t old enough to enjoy the swinging sixties but I’d like to think I would have been more of a Fiat Spider man that a MG driver. A car to put a smile on your face – even if we haven’t won the World Cup since.

The 124 Spider’s fabric roof lowers faster than a Porsche Boxster – or even a Bentley Continental. How come? Well, the Fiat costs considerably less but isn’t lumbered with the response time of an electric hood mechanism.

Pop a clip above the windscreen, push the hood backwards and the whole roof disappears in a flash. It’s just as easy to pull up again and the wind insulation at speed is exceptional.

The Spider is just the sort of car for a winter’s drive across the Cotswolds, heater on full blast, hot seats and your favourite tunes filtering into the cabin from the Bose sound system.

There’s a lot of Mazda-ness about the Spider’s interior but it does feel a touch classier than the MX-5. The seats are superb – Fiat has placed speakers in the headrests so you can even take a phone call sans roof.

The cabin is an absolute delight. Everything is well-placed, there are cubbyholes for bits and pieces, while the general appearance is rather charming – just what you want from a machine that takes its design cues from a different era.

And while the performance figures reveal it takes over seven seconds to reach 60mph, passengers sit so close to the road it actually feels much faster. There’s a more expensive Abarth edition that offers extra thrills.

Fab styling, great interior – the 500X looks a smart buy. Based on the top-selling 500 supermini, it has the pedigree and chic to be a massive hit. Along the same lines as the Mini Countryman but cheaper, the Fiat is available with either two or four-wheel drive. Our 1.6 diesel Cross is near the top of the range at £21,055 but you could opt for the faster 1.4 Multiair or 2.0 diesel version which both cost even more. 0-60mph is dispatched in a modest 10.5 seconds but the economy is an impressive 68.9mpg (combined). A puffed up handbag or a serious crossover car? Join us for a week to find out…

Look, I know we all have different tastes and needs when it comes to cars but I am struggling to understand why anybody would want to pay £23,000 for a compact SUV.

I live in the country and my ancient Land Rover hasn’t engaged full four-wheel drive in three years. Sometimes I long to get stuck in a snow drift but global warming seems to have put pay to that.

All-wheel drive cars like th Fiat 500X are great for surefooted exiting of a junction in the wet. It’s reassuring to know that your BMW has X Drive to cross sleeping policemen when it rains.

But really, if you passed a driving test then what the cluck do you really need four driven wheels for, unless you are retarded in the gear department.

So adding all-wheel drive to the cute little Fiat 500 and then bastardising the bodywork to make it look butch is akin to drawing a moustache on the Mona Lisa.  Pointless.

I can’t say the 500X is bad at anything, apart from being rather dull to drive compared to a bin lorry. And in our Bank Holiday test car guise it really is £23k to own.

We’ve had the summer off at Car Couture, driving a Lamborghini Huracan across the USA. Fun? Yes but actually quite stressful on American roads often designed for tractors.

So to get home and find a sweet, none threatening 500X on the drive is actually quite refreshing. Let’s face it, nobody is going to try and race me in a mini SUV or video my every move on a cell phone.

Somehow the 500X has passed me by, until now. I rather wish Fiat had sent a more zippy 1.4-litre turbo petrol but most people will probably opt for diesel unit.

I know it’s going to serve up masses of economy but the Multijet sounds a bit agricultural by comparison. It’s a harsh ride too but I’m already warming to the tiny Fiat… 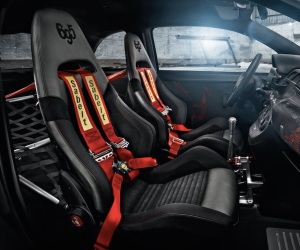 The madness of this particular Biposta is that it’s a car that doesn’t quite know what it is.

On the one hand, it’s £37,000 of uncompromising, full-fat rally car, minus proper door handles, sat nav, air con – or even a radio.

On the other, our test car doesn’t come with the bonkers dog ring gearbox – you have to pay extra for that pleasure.

So instead, our test car features a fairly conventional, dash stick like a normal Fiat 500. Surely you’d expect that for this sort of money?

Just who is going to buy a Biposta remains to be seen. I think the enthusiast will want ALL the extra lightweight, slick gearchange kit included in the price.

Seems a bit rich charging £37k then asking for more for the fun bits!

A car with a 1.4-litre turbo engine has no right to be this fast. But because the stripped out Biposta weighs just 997kg, Fiat would claim it can provide enough thrills to justify costing more than a BMW M235i.

Less is more in this case. Which explains the lightweight Oz alloy wheels and carbon-fibre shells for the two seats. There’s even a titanium frame where the back bench normally sits in a Fiat 500.

Sadly, our May test car isn’t fitted with the track-inspired, dog-ring gearbox. That’s an option enthusiasts would go for. Me? I prefer a gearstick that actually works properly on the road.

The best bits so far? Overtaking a bemused Golf GTI driver and the sound from the Akrapovic exhaust. Especially meaty when the ‘Sport’ button is pressed.

Why would you buy a tiny car costing this much when there are better options out there for the same money? Simply – it’s bloody great fun.

Flipping cars today from a Morgan to a Fiat 500 might seem the more relaxing option. Except when it is the Abarth 695 Biposta.

Created as the world’s smallest supercar, the 695 is pretty exciting in ‘standard’ form. Then you can start personalizing with a dog ring gearbox (the only car with such a road legal option), a five-point rally harness – or what about polycarbonate windows to save weight? Soon the price can top £50k.

We’ve been sent the model with a normal, five-speed gearbox. It still lacks some basic kit (radio, air con) and is also delivered minus the back seat and proper door handles.

The suspension isn’t too harsh, the noise from the twin exhausts is sublime and once the turbo kicks in, it’s impossible not to drive this Fiat fast… 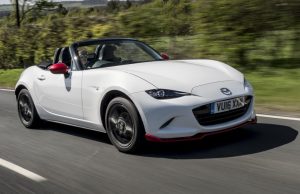 Hell, I really don’t know whether to suggest you opt for the MX-5, or the new Fiat Spider.

A fantastic dilemma to have but both cars offer so much and, considering they sit on the same platform, it hard to believe they are so closely related.

That said, I’m not very close to my brother, so perhaps we should just put the obvious to one side and try and work it out as if both were new cars.

In a nutshell, the MX-5 is more modern looking, needs to be worked hard through the gears but is immensely rewarding.

The Spider is subtle retro, equally well-equipped, better on a long trip than a country lane, and is also a gem to drive.

Whichever one you think you want, do try BOTH cars before putting down a deposit. The Fiat is late to the party but there isn;t much to choose between them…

From Thursday I will be testing the Mercedes SLC – yep, the ‘new’ SLK… 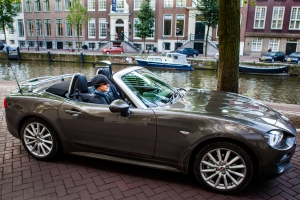 For those of you lucky enough to be stuck in a dilemma over whether to buy an MX-5 or the new Fiat 124 Spider (pictured) I have to say there is no easy fix.

However, I can tell you that the outcome of your deliberations may well depend on how old you are.

Why? Well, I would suggest the Fiat is the better looking car. I can’t say there’s anything wrong with the Mazda especially, just that the modern design doesn’t appeal as much as the Spider.

But then I’m a sprightly 53 and my younger friends have no idea what the original 1966 Fiat Spider looked like – or why the cool bonnet on the new version really works for me.

It is going to be fascinating to see how the Fiat sells compared to the MX-5. I think there is a place for both in this world but the Spider, it has the legs on the Mazda for me…