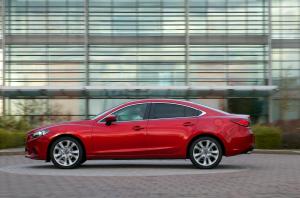 I’m just about to drive to Butlins at Minehead. Why, I hear you scream? Well, I’m playing darts with Adrian Lewis, a former double world champion who is the subject of a feature for the FT.

I mention this because after a day in the Mazda6, I already know I will see plenty of saloons shaped exactly same as mine during the 200-mile round trip.

Don’t get me wrong, from our short time together, it’s clear the Mazda6 is a very fine car. It will do exactly what you ask of it, cleans up nicely after a week hacking up and down the motorways of Britain, and the ‘mouth open’ front grille is attractive.

Then there’s the exceptional economy, a whisper quiet engine and super-low emissions to shame a BMW.

What’s not to like? Unfortunately, the Mazda6 seems to have been built to blend in with the crowd. It’s from the M&S range of fashionable cars – which means mass appeal but very little to talk about at your neighbour’s dinner party.

So, no Alfa Guilietta then. But does it have any remarkable redeeming features? Find out tomorrow

Jessica… The Camaro is the epitome of all the stereotypes we relate to America and Americans.

Its big, its shameless and it hasn’t even tried to pretend that burning fossil fuels has an environmental impact.  Who cares how much fuel you burns on the open road when everyone has the right to live the American dream?

We are, however, fascinated by the uncompromising and openly brash nature of the American psyche. Secretly, we would like to be part of that dream.

The Chevrolet is very hard to dislike. The seats are big and comfy and the interior is retro, without any soft lines or compromise to a softer, contemporary look.

The four-dial, clock style information unit (featuring information that you really don’t need!) is cool and takes you right back to the seventies.

The drive is as brash as the look, fast, with a firm foot required to slow down the vast engine, it’s miles away from the soft touch driving we have come to expect from modern high performance cars.

But left-hand driving aside, plus the fact that you have to be aware of being very wide on our bijoux country roads, the Camara is fun, ridiculous and very hard not to enjoy.

I did once own a giant Chevy Blazer. Again the idea was fun, the smell of old leather, the shift stick on the steering wheel, the throaty engine of huge gas guzzling proportions.

But the reality of driving it on English roads meant it did not stay long.  But for a while being part on an American stereotype was highly amusing, though impossible to keep up.

We’ve already highlighted some of the quirky features of the Camaro which owners are just going to have to live with. As the days have passed, a few more have come to light!

I thought the large screen infotainment system would include a sat nav system but apparently it doesn’t. Well, if it’s there, you are certainly going to struggle to find it.

The boot is huge for a convertible, except the opening hatch through to the space is tiny. The boot lid doesn’t feature a proper internal handle either, so on a wet November day in England, you will get your hands dirty.

Access to the rear two seats – little people only – looks straightforward enough, except the handle to lower the front seat forward is situated in the wrong place, so you have to reach right in to the car to find it.

And finally, it has tiny sun visors, which are fixed forward. That means if the sun is shining in from the side of the car, you will be left squinting.

Individually, these little things don’t add up to much but together, they might become a daily headache…

Today I was at Reading University interviewing a cyborg. No, it’s true. Professor David Warwick had implants put in his arm which tapped in to his neurological system and allowed man and machine to work in almost perfect harmony.

I had a similar experience driving there in the Camaro. In so much as I finally started to feel at home is a tail happy, 400bhp rear-wheel drive, left-hand drive car. Believe me, add too much acceleration on a wet roundabout and it becomes interesting.

The Chevrolet ate up the miles on the M4 – as well as the petrol – and was supremely comfortable. It’s rather quirky, in a 1980s sort of way, which makes the whole experience of driving the Camaro quite endearing.

The dashboard is a strange mix of modernity, like the head-up display and large screen infotainment system, and retro ‘almost’ cool. A rash of four dials in front of the auto gearstick reminds me of a sporty Italian car from 40 years ago – totally pointless, unless you really do need to know your oil temperature on a clock-like dial.

Having covered almost 200 miles, it was time to put some fuel in too! Did I mention it was thirsty? 17.8mpg thirsty to be exact. Ouch. 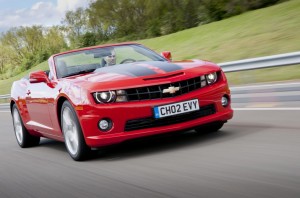 It’s taken a few days but the muscle and character of the Camaro is finally beginning to win me over. Once I’d had the chance to drive it outside of the urban environment, the 6.0-ltre Chevy proved an absolute blast!

I swear the entire front end lifts up when you hit the accelerator and the roar from the twin exhaust pipes is just too tempting to ignore. I’ve finally mastered the head-up display now too, which flashes the speed and various other features just above the line of the bonnet, reflected on the inside of the windscreen. Cool.

While there is plenty of flex in the convertible’s body design – manifested in the odd squeak and rattle – the Camaro is actually a very comfortable and quiet drive. The front seats are vast, like your grandfather’s favourite armchair.

The one place you don’t want to be sitting in this car is the passenger seat on a country A-road. It’s not that my driving is so bad, just that the Camaro is so wide you really do have to keep your eye on your lane positioning.

Sometimes you need to stand back a few paces to get the true picture – and that’s certainly true of the Camaro. Compared to your average British car, it’s the size of Texas.

It’s almost five metres long, which for a sports car is BIG. And tipping the scales at just under 1800kg, it’s way heavier than any European competition too.

So that 400bhp of burbling V8 under the enormous bonnet is actually doing a remarkable job powering the Chevy to 60mph in 5.2 seconds. All I can tell you is that when you do hit the accelerator on a straight stretch of road, the Camaro pushes you back in the seat.

It’s definitely not the car for blasting around the country lanes of Gloucestershire but on a decent A-road, the burly Yank is a lot of fun indeed…

The 6.2-litre V8 is actually quite refined around town, well unless you factor in the 12mpg that is. Be warned though, the slightest press of the accelerator lifts the bonnet and sends the American surging forward.

Unlike a Ferrari or Aston Martin, the Camaro doesn’t let out a highly-tuned squeal when you do decide to make progress. It’s more of a gut grumble, or as a famous motoring writer once penned of TVR exhaust pipes, ‘like two lesbians moaning in a bucket’.

Despite the ridiculous stripes over the car, the retro looks and in-your-face image, the Chevrolet is quite civilised on a day to day basis. If only they made a right hand-drive it would be even more feasible. That and a following petrol tanker…

Shy, retiring types need not apply… Not only is today’s new test car a rather bright colour, it also boasts two racing stripes over the bonnet and boot lid. Eek.

American muscle cars don’t come much more brawny than the Chevrolet Camaro. It sits squat, wide and very long on my driveway, screaming performance, in an outdated, very expensive to run type way.

How expensive? Well, apart from the £42,000 price tag on our test car, the best fuel consumption we can hope for is 21.5mpg in the combined cycle! Or 14.9mpg around town.

All that power and left hand-drive too – it’s going to be an interesting week. Right, I’m heading to the shops to see if I can find a parking space big enough… 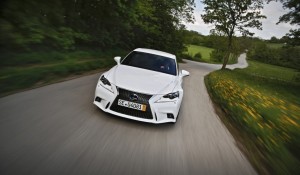 The truly great cars are the ones you long to drive every day. Like a faithful hound, they are always there, ready to please and entertain. So does the Lexus IS300h tick that box?

To be honest, I can’t fault the engineering. The petrol-electric hybrid engine is an astonishing performer, returning 49.3mpg during the week and responding in every sense like a conventional car.

The IS is very easy on the eye too, with that BMW-esque rear-end and some neatly cut sculpting on the side panels. Not sure about the bug-eye headlights but still a great looking saloon.

But let’s face it, it’s going to meet very stiff competition in the premium brand sector and there are a few areas where the Lexus simply doesn’t measure up.

First is the painfully designed centre column of the dashboard that houses the sat nav. It doesn’t look anything like premium brand material to me. Then there is the sat nav itself, which doesn’t input full postcodes. Come on Lexus, that’s just not acceptable any more.

And finally, the driver’s seat, which didn’t marry up with my back in all the right places. It probably works for a lot of people but that also isn’t good enough these days.

Overall, a worthy rival to the best of BMW and Mercedes but a class-leader? I think not… 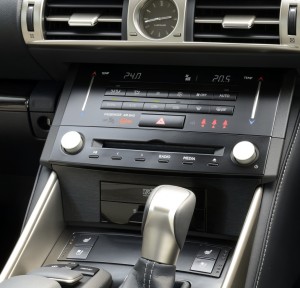 Maybe we’re spoilt because the test cars that are delivered to Car Couture are generally top of the range, or well specified. Journalists are fickle creatures, after all, and easily persuaded by the allure of leather seats and bum warmers.

So driving the SE model of the IS300h has been slightly tainted by the lack of leather and, perhaps even more surprising, the heated seats that are conspicuous in their absence. We’ve just become so used to pressing a button and feeling the warmth filter up from our seats.

My grandfather was actually the man who invented heated seats – he used to park his backside on hot water bottle with the tiniest drop of hot water inside. He was brilliant my grandfather – we could have made a fortune if Ford had heard of it.

These days, cars like the Range Rover and expensive BMWs have a heated steering wheel as standard. My grandfather probably never thought about an invention for that one but it probably would have includes rags and Selotape.