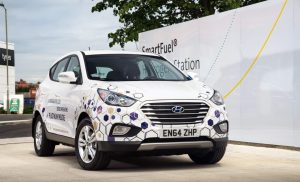 I’m waiting for the fossil-fuelled lorry of yesterday to come and pick up the hydrogen car of the future. The Fuel Cell Hyundai and I are out of gas – literally – and reality has kicked in.

That reality means there isn’t a filling station close enough for me to fill up the ix35. It would be fine if I lived in London but running out of juice in the Fuel Cell car in the Cotswolds is a problem.

All that will change as as fuel cell technology improves and more hydrogen filling stations open up across the country.

It will take time but after a week with the Fuel Cell ix35, I can tell you that it’s well worth the wait.

It takes a little getting used to, the Hyundai Fuel Cell car. I drove 180 miles to London and back on the weekend and experienced the highs and minor lows of hydrogen ownership.

Firstly, there were a couple of ‘moments’ when I pressed the accelerator and there was hardly any response. It happened pulling away at a junction and I thought I was going to be rear-ended. No idea what the problem was but it did it twice and then the car was fine.

Then I returned home to the Cotswolds and discovered I only had 50 miles left in the tank. Of course, instead of popping down to the local petrol station, I had to study a map and work out where my nearest hydrogen tank was. Turns out it’s Swindon, quite a slep away.

And the highs? Well, whizzing down the M40 under a full moon in a car that’s quieter than any Rolls-Royce. It’s like being in a flying pod – silence. There’s no impression of speed, no artificial roar, no drama.

It’s quite brilliant and I can guarantee you will love the future of motoring, when fuel cells finally arrives… 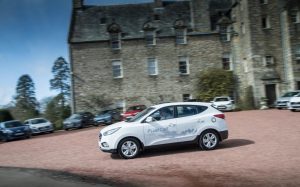 Hyundai yesterday announced that a whole fleet of ix35 Fuel Cells will soon take to the streets of Paris as taxis. This I like – but the car is still more rare than almost any model of Ferrari.

Five hydrogen Hyundais joined the fleet in the French capital a year ago but now a further 60 have been ordered. There are currently just 300 on the road in 12 European countries.

The Toyota Mirai also runs on hydrogen but just a limited number have been released in the UK. The Honda Clarity is also on sale here. Both are more futuristic, while the ix35 blends in with the crowd.

Seeing a hydrogen car on the road in the UK really is a rarity. Will that change in the future? More than likely yes but it’s going to take a very long time to get there… 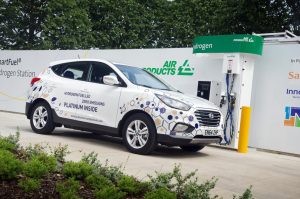 The simple fact is this – we could all be running our cars on environmentally friendly hydrogen if we wanted to. At present though, it’s not our choice.

The problem is the infrastructure isn’t there. Electric charging points are springing up across the country but it’s still a bind trying to find one sometimes. So given there are only a handful of hydrogen filling stations, it’s not really a feasible option to consider Fuel Cell.

Hyundai started working on hydrogen cars almost 20 years ago. There’s been a steady refinement since and on day two of driving the ix35 version, I can tell you there’s very little difference to a ‘normal’ car.

The only issue I have is that over 60mph there’s very little torque – and fuel consumption really suffers.

So like pure electric cars, this is really a machine for city dwellers. That said, give it a few years and technologically will have moved on to a point where even us country folk can consider owning one…

It’s a field day for curtain twitchers. The words ‘Fuel Cell’ are splattered down the side of our latest test car and not everybody in my Cotswold village seems to realise the future has just landed.

Actually, it’s been here for some time but the ix35 is the first, mass-production passenger vehicle offered for sale in the UK powered purely by hydrogen. Stick that in your fossil-fueled pipe, President Trump.

Anybody could buy a Fuel Cell ix35 – provided they have £53k to spare of course. Remove the high-vis graphics and it would be hard to spot this is anything different to the standard Hyundai SUV.

First impressions? Well, it looks like a normal car but sounds like a space ship taxiing for lift-off. That’s because the Fuel Cell model emits a cool ET-type sound to warn pedestrians a silent vehicle is approaching!

Love it – but can I live with it? Lots of miles ahead to find out….

As an exercise in upgrading the brand image, the Hyundai Genesis does a decent enough job. It has set the ground nicely for the arrival next year of a new generation of Genesis cars that will be much more of a challenge to German rivals.

While this current Genesis is very easy on the eye and loaded with luxury, it won’t find many takers in the UK. This is largely due to the lack of a diesel engine version – and the enormous emissions from the 3.8-litre petrol engine.

You have to imagine that depreciation on a £47,000 Hyundai will be pretty hefty too. Quite possibly massive.

At least it’s a refreshing change from the BMW/Mercedes/Audi offerings that dominate the executive market. But come the day when you have to open your wallet, you know it’s going to have a German badge on the bonnet, don’t you? 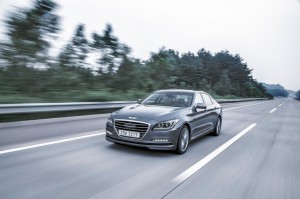 You can forgive the soft suspension and boat-like handling of the Genesis if you take into account that the Hyundai is not designed for British roads – it’s primarily targeted at North America. Straight, dull roads about the width of a football pitch.

I wonder if there is anyone in the UK who is mad enough to have bought one instead of a BMW 5 Series, which is by far the better car for UK conditions. (except the Hyundai has a far better five-year guarantee, of course).

The real reason Hyundai has brought the Genesis to this country is to change the way we perceive the Korean brand. They want us to think upmarket when we utter the name – not just very good, value for money family cars.

And now we know why of course. A whole range of Genesis models will arrive over the next couple of years. Genesis will include a number of premium brand-style cars aimed squarely at German car buyers, of all shapes and sizes.

So what you are seeing here is the start of a whole new era for Hyundai. Hence the name perhaps…

So my favourite feature on the Genesis isn’t the panoramic sunroof, or the air conditioned seats. I like the head-up display too but that isn’t it either.

What I really like about the big Hyundai are the door mirror lights that flash the name ‘Genesis’ down onto the road at night when you walk up towards the car. Cool.

Jaguar Land Rover do it on their top spec cars too. It’s pretty neat and just adds that touch of class.

Just be warned – it doesn;t work if you park on gravel. However, for a psychedelic effect of great note, try parking next to a big puddle. The reflection is brilliant! 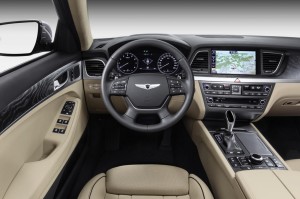 I’m starting to feel like the Princess and the Pea driving the Genesis. Here’s a big, luxury car – almost five metres long – that cossets passengers with air suspension and armchair seats.

In the back, you can electronically recline the seats. Back seat passengers sitting on the left can also remotely operate the front seat to give themselves more leg room. Clever.

Yet even with all these comforts and luxuries, there’s just something about the position of the driver’s seat that isn’t quite right, despite multiple electronic adjustments and lumbar supports.

I think it’s the angle of the seat back, or the way it has been sculpted. But after 300 miles in the big Hyundai yesterday, I just can’t find the perfect ‘BMW-style’ driving position…

The strangest thing. I found myself sat in the Hyundai’s executive fuel-burner this morning, on the long drive up to Leeds. I was heading north to interview the championship winning Yorkshire Cricket Team. Nice bunch of lads.

Anyway, somewhere around Leicester I had this huge sense of deja vu. What was it about the Genesis that took me back to the bad hair days of the 1990s?

I’ll tell you. The interior could have come straight from a Lexus LS. There is lashings of perforated leather (hot and air cooled seats), some rather naff wood veneer on the dash, and less than impressive plastics.

I couldn’t say there was anything wrong with the cabin but it felt and almost smelt old fashioned. Mercedes trim can be questionable these days but the Hyundai really isn’t premium feel.

This isn’t helped by a raft of buttons and dials that could have come from lesser Hyundai models. The sat nav is excellent – easy to use and logical – and there’s a stonking sound system.

However, I’m not going to pay £47k just for that pleasure…