Even if you want one, you can’t have one. The full allocation of McLaren’s new hypercar sold out ages ago – long before the first delivery to customers start next month. The latest model in the company’s ‘Ultimate Series’ is loaded with an uprated 789bhp version of the 4.0-litre V8 that powers the remarkable 720S. Just 500 will be built, each costing £750,000 BEFORE taxes and options. 0-62mph in 2.8 seconds and a top speed of 211mph. Just how fast do you want to go? CarCouture visits the track in Portugal where Ayrton Senna won his first grand prix to find out…

When the clock struck midnight last night, the internet was awash with embargoed reviews of the new McLaren Senna. It had to be amazing to be worthy of the Brazilian champion’s name – and it is.

Unlike the forthcoming Brabham BT62 track car, McLaren insist their machine is for the road as well. However, unless you own a large slice of England, don’t expect to enjoy the full performance of one of the world’s greatest cars.

That’s because the McLaren Senna is so fast it really needs a racetrack – and possibly a tame racing driver – to exploit its potential to anywhere near full capacity. For the rest of us, this hugely powerful McLaren is a sharp learning curve.

I recently drove McLaren’s top of the range 720S – a car that’s so easy to live with you could use it to sit the driving test. How could the Senna be that different?

Monstrous power has been squeezed from the same 4.0-litre V8 but it’s much more than that. The car codenamed BP23 relies on incredible, track-focussed technology to get it around the track faster than anything I’ve ever driven.

This isn’t a hybrid like the P1 but it is incredibly light at 1200kg. A whopping rear spoiler that outdoes anything from the 1980s also produces 800kg of downforce at 150mph. The result? The Senna feels stable and responsive at crazy speeds.

Through the corners the grip is staggering, thanks in no small part to some Senna tuned tyres. And strapped in to the cockpit with a HANS device and six point harness, the driver feels completely at one with the McLaren.

In truth, your nerve will go long before the Senna lets go. The shove in your back on the straights is quite brutal – how on earth this car could be used on the road is beyond me!

Ayrton Senna’s first win came at this Estoril track in a turbocharged Lotus. What you don’t need to enjoy this McLaren is quite the same level of ability…

Just back from driving the new McLaren 570S Spider in Barcelona. The mountain roads are sensational – the Spider a dream to sling fast into a bend. It costs £165,000 but would I really swap one for a back-to-basics Caterham 7?

Well, the way I see it, most people would choose the McLaren every time. It’s a genuine supercar, with a heritage to match the Caterham. It’s six times the price and you can even complete a phone call with the top down.

The Seven doesn’t even have a radio. You wouldn’t hear it anyway. This anniversary special model isn’t that quick either and just climbing inside with the roof in place requires yoga classes at my age.

Yet, there is something pure about the driving experience in the Caterham. Minus the carbon cermaic brakes, the driver aids and the three dynamic driving modes of the 570S.

I’m a huge fan of the McLaren but there are so few places to push a supercar to the limit these days, there’s actually more enjoyment to be had in a Caterham on British roads than the 570.

Think I’m wrong? Well, the McLaren is an experience – a dream car. The Caterham reminds me of a 1950s go-kart. But the fact it thills just as much for a sixth of price must tell you something…

I just can’t think why anybody would buy a Porsche 911 Turbo S instead of the McLaren 540C.

The porker has a back seat large enough to carry a small child/shopping/dog. I seem to remember there are cupholders too.

Me? I’d go for the McLaren every time. There’s a sense of occasion whenever I walk out to the driveway. It boasts an epic pedigree and is so much rarer than the 911.

Two great cars but only one winner.

If you’ve never driven a supercar the odd thing is that sometimes the impression of speed is not as great as you might have anticipated.

I’ve often wondered why this is – then I realised it’s because these cars are so good, so competent that you just don’t realise how fast you are travelling.

Maybe that’s why accoustic exhaust systems have become regular fit on so many models. They create the drama that feels like it is missing!

Th McLaren doesn’t have a screaming exhaust button and it’s all the better for it. The 540C is the cheapest car in their stable but it’s perhaps the most usable on an everyday basis.

I think I could have given my granny the keys to a 540C and she wouldn’t have felt intimidated.

Bad news usually comes in threes. Except when a friend announces he has cancer and it feels like the whole world has caved in.

I’ve been scrabbling around for words – what do you say to somebody who is younger than you and suffering like that?

That was yesterday. After kicking it around in my head for 24 hours I’ve decided the best way to cheer him up is to look forward and try and be as strong as he is.

So today, I’m going to buy him a fat, Havana cigar (he has one or two a year max) and take him for an outrageously fast drive in a McLaren.

I’m not sure either are that good for your health but WTF. According to Volvo, it sounds like V8s won’t be around much longer either.

Let’s enjoy them and life while we can…

Here is a bluffers guide to driving a McLaren 570 GT (or any other Mclaren for that matter!). 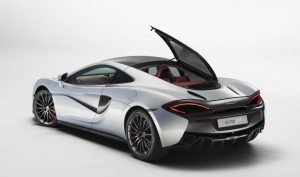 It’s said to be the most road-biased McLaren to date but don’t go thinking the 570 GT is anything less than a supercar.

Like a thoroughbred Lamborghini, Porsche or Aston Martin, the ‘softer’ cabin materials and lush trim can’t hide the fact this GT is capable of 204mph and 0-60mph in under four seconds.

It also has that supercar ability to male you feel like you are travelling at 50mph when the speedo is registering 75mph.

That twin turbo V8 is barely audible in the cabin at low speed – then rips into life when you find an open road long enough to enjoy the power it can serve up.

The 570 GT is impressive to look at and drive. It’s also spoiling for fight whenever the opportunity arrises..

It’s difficult to criticise the 570 GT. It’s not perfect but I can’t think of a more usable ‘everyday’ supercar.

What’s especially wonderful about the McLaren is that it is easy to drive. Just as the Golf GTI makes every driver feel like a hero, the McLaren instils confidence.

I still have issues with the infotainment system, which isn’t as intuitive as it could be – and windscreen wipers that take an age to activate.

Otherwise it’s a car you want to be in all the time. If you’re ever lucky enough to drive one, savour every minute….

I’ve just returned from a two-week tour of New Zealand – organised by McLaren it was for owners from around to world to gather and celebrate the life of company founder Bruce McLaren.

They came from as far afield as Hong Kong and California, enjoying some of the best roads in the Southern hemisphere.

There were plenty of models on offer but I became unreasonably attached to the 570 GT. It may weigh some 35kg more than the standard 570S but that’s because McLaren has added some rather lovely extra standard equipment.

That includes a leather trimmed load area and a glass roof. Perhaps more importantly, McLaren has retuned the suspension to offer a more comfort-orientated set-up for GT adventures.

Even the quieter exhaust system makes for more enjoyable long distance travelling – and that opening rear screen also increases luggage capacity by 90 litres to what is already available under the bonnet.

June 7 I didn’t appreciate how loud the 650S could be – until I watched it disappear down the driveway.

Even with the roof open, or the rear screen lowered, you don’t get the full blast of the McLaren exhausts like those stood behind it.

No wonder I’ve attracted so much attention. It makes the acoustic exhaust systems of Porsche, Bentley and even Maserati sound weedy by comparison.

Obviously, I’ll miss the McLaren but I should say this. It’s such an outrageous spectacle that I wonder what place it has on our roads.

After driving the 650S for five days I realised there are very few places you can enjoy half the power and performance it has on tap.

For that reason, I think it belongs on the racetrack and not on a British A road…