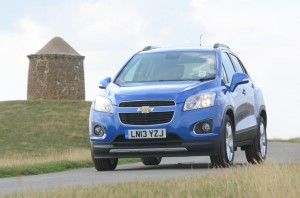 Sometime ago in a previous century, I was driving in Scotland on the launch of a crazy little vehicle called a Suzuki Jimny. It was the smallest 4×4 since the arrival of the donkey and a pack of journalists from around the world were causing chaos in the Glens.

It was a slightly surreal moment seeing four Japanese writers squeezed in tiny Jimny. One had bought a kilt and wore it later at supper. While the new Suzuki was definitely flawed, it was also bloody good fun to drive and superb in the dirt – thanks to a short wheelbase and light weight.

I can see similarities with the Trax. It’s nowhere near as light as the Jimny of course and beautifully flawed too – but I can’t help but like it.  Why? Because although the Chevrolet is noisy at speed, jittery on the corners and not blessed with the most refined of diesel engines, it has bags of spirit.

Like all great flawed cars – think Alfa Romeo Alfasud, Renault Avantime, Citroen 2CV – you just can’t help but like a machine that puts a smile on your face. Winding the Trax up to speed involves a lot of leg and arm work through the gears, it rolls slightly alarmingly on corners and the ride is somewhat lacking but would I want one if I lived up a slightly muddy lane in the Trossachs? Yes.