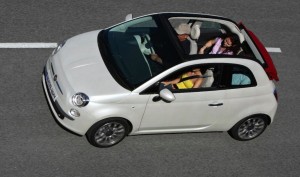 My only sad moment in the 500C happened yesterday when I heard on the radio (wot, no DAB Fiat?) than comedian Rik Mayall had died. For a generation of schoolboys, Mayall was the anarchic madman, smashing his head through walls, hitting Ade Edmondson with a cricket bat and generally being a lunatic.

Twenty years ago, I met the pair of them for lunch in a Bristol restaurant, to promote their hit comedy show Bottom. It was supposed to be an hour-long interview – three hours later we were still eating cake and ice cream.

Fortunately for me, both of them were off the booze, which at least gave me a fighting chance. Except they kept filling my glass and the interview notes read like gobbledegook when I got back to my desk later.

What I also found when I got back to the office was that my jacket was heavier than when I had left several hours earlier. Mayall and Edmonsdon had filled my pockets with cutlery and let me walk out the restaurant…