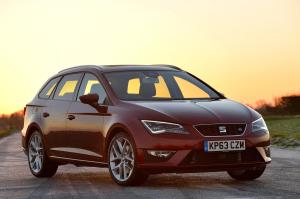 The ST estate has only been out a few months – they’re still a rare spot on UK roads. Almost as unusual as seeing a man take a cat for a walk, which is what I did this morning.

To be fair, Hubble the Burmese followed me and the dog around the farm. It makes you wonder why it doesn’t happen more often. In London, where owning a dog is virtually impossible these days, a cat would be much more practical. You could pop your feline in a man bag.

Hubble has also taken to exploring the ST. He’s been roaming the 1470-litre luggage area (only a kitten’s width smaller than a VW Golf estate) and trying to get underneath the moveable boot floor.

We haven’t been for a drive with him yet but it wouldn’t be the first time he has been a stowaway. And although the seats are trimmed in black cloth and alcantara, rather than leather, Hubble thinks they are the cat’s whiskers too…