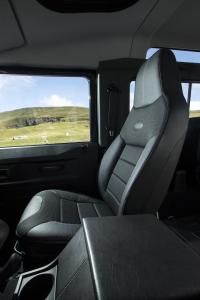 Driving the Defender is like stepping back in time. Yes, the top spec XS on test at Car Couture does boast electric windows, heated windscreen and bum warmers but there are few creature comforts to make life more bearable.

It’e even equipped with one of those CD/radios featuring a front panel you have to remove for security. Our test car has a radio upgrade, which means the unit features Bluetooth and a aux in jack. However, despite the beefed up speakers, I was forced to turn the system off at 70mph on the M40 because it was too loud in the cabin with engine and road noise!

As a Land Rover owner, I’m fascinated to see how the replacement for the Defender will fair. It’s said to be aimed just as much at urbanites as country folk – I bloody well hope they don’t turn it in to some twee machine  aimed at lifestyle buyers.

The key point is that it will be a whole lot better than what we’re driving this week. Complete with eight-speed automatic gearbox and an aluminium, monocoque chassis. It can’t come soon enough…