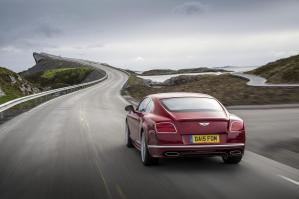 The Breitling clock, the quilted leather seats… there’s no doubt the interior of the GT Speed is more like a gentlemen’s club than the cabin of a car. But what about the exterior?

A friend of mine is ‘freaked out’ by the front end. She says the big, round headlights remind her of a spider – and that’s not a good thing.

I find the rear end slightly more troubling. It’s that lip spoiler that distorts the smooth flow of the boot line.

There’s a new, hidden spoiler, that only pops out at high speed on 2016 model year Speeds. I would have thought that was enough to keep the GT on the road at 200mph?

Either way, the back of the Continental isn’t the prettiest. I’ve never seen the back end of a spider close up but perhaps there is a similarity…