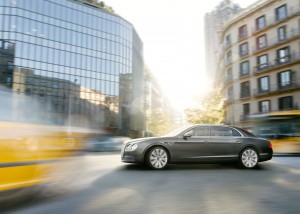 The Bentley is an odd set up. The old school atmosphere of the interior is attached to a high performance chassis and engine that is capable of an astonishing turn of speed.

Slip the weighty chunk of gearshifter into Sport and the Flying Spur lives up to its name. It’s remarkably quick, considering the whole package weighs a whopping 2.4 tons.

Other cars like the Mercedes S600 do the limo thing better but, of course, they simply ain’t a Bentley W12 with this turn of speed.

The 6.0-litre has huge amounts of torque on tap. It turns this W12 model into a very special car that drives a lot better than the ageing styling suggests it might.