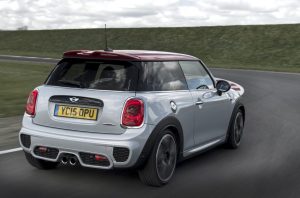 July 11 Truth is, I’m still trying to get my head around the cake tin-sized infotainment centre that dominates the dashboard of the JCW.

I’ve always liked the fact the the navigation map appears in the middle – it’s all a bit retro James Bond, in an Austin Powers sort of way. Groovy.

The JCW can be equipped with the world’s largest rev counter too. It’s a series of LED lights that span the circumference of said cake tin and light up one by one as the revs increase.

The same lights turn blue when the Bluetooth system is taking a call. Serves little purpose but I rather like it.

Beneath is a row of aircraft-style toggle switches, while a click wheel between the front seat operates many of the on-screen functions.

It’s all lovely cool stuff – a designer handbag of a car. Far more chic than the class-leading Ford Fiesta ST, although the Mini is nowhere near as engaging to drive.

So, if you want to stylish interior, the JCW is your choice. If you want a faster car that costs around £5k less, you may have to consider the delights of dealing with a Ford dealership…