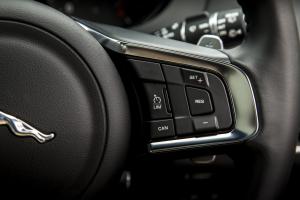 Jaguar’s first SUV is infused with more than a dash of Land Rover DNA. You’d expect that with two such bedfellows.

Yet the F-Pace isn’t really designed to crash through the jungle or pull a heavy load. It’s really a bit of a softie – with part-time four-wheel drive and very pretty styling.

The line between SUV and proper 4×4 has been blurred for a long time. The F-Pace errs on the side of the former. It’s not a sporty beast like the Porsche Macan either – whatever the advertising tries to tell you.

Sure the supercharged V6 version is tasty but really the F-Pace will be mostly consumed as a 2.0-litre diesel, like our test car this week.

Let’s see how it goes…