The new mid-size SUV from Sweden is racking up a raft of awards, as Volvo’s resurgence in the family car market continues. The D5 R-Design costs £43,505 and returns an impressive 54.1mpg (combined) from its 235bhp 2.o-litre diesel engine – more importantly than that, it’s an exceptionally good car with a classy interior and more safety features than you can shake a reindeer antler at…

In recent years Volvo has left its antique dealer/two Labrador image behind and become the epitome of Scandinavian chic. No, it doesn’t sell a sports car but as a multi-tool of motors, the Swedes now put together SUVs better than an Ikea flat pack.

The transformation started with the XC90 in 2002, a full-fat luxury crossover that left many conventional MPV owners with a sour taste in their mouth. The latest XC90 is already regarded as a legendary all-rounder, super safe and very desirable.

The pint-sized XC40 has just launched Volvo into the compact SUV market too. It has snatched the European Car of the Year Award and is going to give the BMW X1 and Audi Q3 a bloody nose, make no mistake. 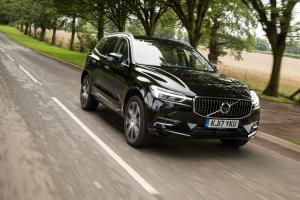 Now I’m discovering my inner Sven driving the XC60. The semi-skimmed, mid-range model is smaller than the XC90 and minus a third row of seats but otherwise a doppelganger. Last month it was named World Car of the Year. Yep, and it’s a Volvo.

The XC60 is lathered in lagom – that’s trendy Scandi-speak for ‘just right’. I’ve already discovered it boasts the world’s most relaxing and well-organised cabin, feng shui’d to the hilt and all the more brilliant for it.

So if you currently drive a sports utility vehicle with a busy dashboard, marvel at what Volvo’s interior designers have done to theirs. My dog could count the number of buttons in our XC60 on two paws.

They’ve been swept away and replaced with a mini iPad screen. It’s not as big as the one in a Tesla but intuitive and simple. That also leaves a larger space in the air-conditioned glovebox where the manual used to be. You see everything needed to learn about this car is accessed via the touchscreen manual.

I wouldn’t say I’m your typical Volvo driver – one hound, no kids – but almost begrudgingly, after just seven days, I have to admit the XC60 is something I never expected it to be. Cool.