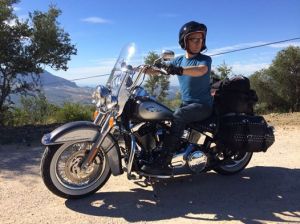 Perfect week for a Morgan! But what happens when the sun goes out and you need that warm wind in your hair feeling again?

Swap from four wheels to two and head down to you nearest Harley-Davidson dealership. It’s giving riders the chance to escape the impending chill with the chance to win a £5,000 holiday adventure of a lifetime in South Africa.

To enter the ‘Follow The Sun’ competition you just need to book a test ride before the end of November.

The winning name out of the hat in December will take home a stonking holiday that is part of Harley’s Authorized Tours programme.

So, a bit of background first. I’ve written about cars for 30 years and never, ever driven a Morgan. What an admission. The problem was that the Morgan press office used to consist of a chap in a tweed jacket, eating a bacon sandwich and only answering the phone if the golf course was busy.

It was impossible to get a test car. Bristol used to be the same. If the PR jonny there thought you didn’t wear brogues and a tie, well, you’re not welcome in the club. Go and drive something bling, like a Bentley.

And so it was that yesterday I turned up at the factory in Malvern, where they have been building cars from wood and metal since 1908. The ‘factory’ is actually a rather ramshackle collection of single storey sheds that looks like a school. One that should have been demolished long before the Germans even had a chance to blitz them.

They now have a proper PR guy too and he’s more enthusiastic than a fox in a hen house. Brilliant. We did a factory tour together. I met a man who has been with the company since 1961 – that’s before the Beatles had their first hit.

I fell in love with the place.

About three hours later he handed me the keys to a spanking new Morgan Plus 8. I pressed the start button and frightened some children taking selfies in front of the bonnet. Within ten miles I realised what I’d been missing all these years. The ones spent in a draft free, climate-controlled cabin, fully anaethetised from the driving experience.

I don’t actually give a stuff where the Morgan is made but I like the fact it is truly British, owned by a British family who know the names of all their employees and use Gingham tablecloths in the canteen.

Tomorrow I’ll tell you about the car. Sorry if you’ve just bought a 911 but you just went for the sensible choice and perhaps forgot what driving a sports car is all about…