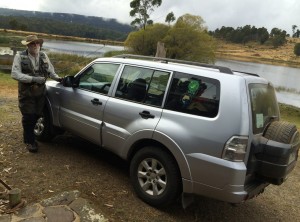 Tasmanian Roger Butler has been fishing since he was six. His father taught him the basics and charged the youngster for every fly he lost in a tree or bush while learning to cast. It didn’t take him long to master the art.

Butler’s 2007 Mitsubishi Pajero used to belong to the police. Now he runs his fly fishing tours out of Hobart, using the 4×4 as his home from home. It’s loaded with more fishing equipment than you can shake a rod at.

Why does he drive a Mitsubishi off-roader and not a Toyota, like the rest of Tasmania? Butler says it fits his 6ft 5ins frame perfectly and is an admirable workhorse.

Butler is also the loudest person I have ever shared a car with for three days. He is a real-life Foghorn Leghorn, if you can remember that cartoon. He also fished with Billy Connolly when the comedian was in Tasmania for three days in 2010.

And I like him because despite his endless banter, he taught me to fly fish and then land my first three fish. Thanks Roger.