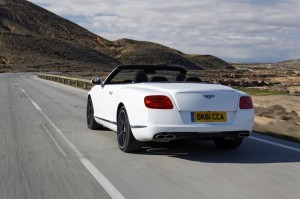 The Continental hasn’t actually changed much design-wise since it was launched 11 years ago. I suppose that when most people think of a Bentley, they drift back in time anyway. Churchill, bulldogs and the thwack of leather on willow, was how one friend described it this weekend.

The V8 engine certainly barks into life when you press the start button on the centre console, there’s acres of leather in the cabin, and the adjustable front seats would even accommodation a portly Churchill. Not so sure he would have approved of air conditioned and heated chairs though, or ones that gently massage the occupant either.

But if we are talking about style, well, the Bentley isn’t everybody’s cup of Earl Grey. It’s squat, muscular and very wide, which gives more than hint of the mighty power plant under that long bonnet. And while it looks more macho than a bodybuilder’s mankini from the front, something has gone strangely awry with the rear.

Awry not wrong but the GTC certainly ain’t a beautiful sight from the back. The ‘flat’ styling looks as if this Bentley has been rammed into a brick wall at speed. And because the hood has to fold into a section directly in front of the boot lid, this is a car with a very large bottom indeed.