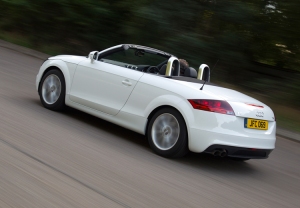 I’m not sure why God created the Midlands. He obviously wasn’t a petrol head because the roads are terrible – especially if you are travelling across country, rather than to the north, or south.

The whole A-road network around Birmingham seems to consist of A-roads choked up with heavy goods vehicles, chugging along at 50mph, or oversize tractors which seem to have become the new caravan. Awful.

I’m just returned from a six hour slog to interview Geoff Capes, a former Commonwealth gold medallist and the World’s Strongest Man, twice. Geoff is now 27-stone and breeds budgies (it’s true) but he once appeared in a Volkswagen Polo commercial, lifting the supermini off the ground. He split ten pairs of trousers in the process.

Geoff now drives a Discovery and there’s no doubt he would have tossed the Audi TT to one side if I had blocked him in on the driveway. The TT isn’t a Geoff Capes sort of car but it’s roomy enough for a pipsqueak like me. Plus the folding soft top means the roof mechanism doesn’t eat into the boot space.

Size isn’t everything and the TT’s small cabin is perfect in every other way. Large blokes need not apply.