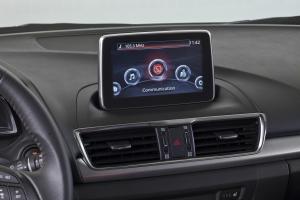 I can only imagine the carnage at St Andrews this morning following last night’s Scottish Car of the Year Awards (ahem, that’s SCOTY for short). The illustrious gentlemen of the press who live north of the border are famous in motoring circles for not leaving so much as a drop in their glasses.

At least they could rub the sleep out of their eyes knowing they had done a good job by picking the Mazda3 as the car of the year in the Family Car category. It beat the Citroen Cactus (reviewed elsewhere on Car Couture) and the Peugeot 308.

A good choice and a brave one, considering what’s on offer from Ford and Vauxhall. Personally, I’d have called it a tie with the Cactus – a car that dares to be different.

The Mazda’s brilliant Skyactiv engines were highly commended but I would disagree with judges who said the 3’s interior was ‘Mazda’s best yet’. For me, the plain dashboard does nothing to excite the senses and is the one weak point of the car….