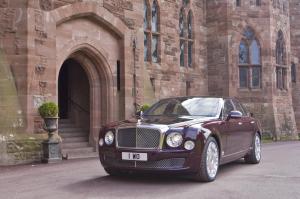 There’s one very unwelcome element to driving any Bentley – the unwanted attention of ‘angry’ drivers. You know the sort – people who pull out in front of you on a dual carriageway and then deliberately slow down as they overtake.

It seems to be a weird national sport in the UK, especially among white van drivers who are upset at the fact you just happen to be in an expensive car and therefore, by their screwy reasoning, must be a posh git.

It happened yesterday as I drove up to the Lake District (averaging a quite remarkably 23.3mpg!). Not even a flash from those big plate headlights would make the plonker move over.

I suppose the joke’s on him ultimately because I couldn’t even afford a set of tyres for the Mulsanne.

Never judge a man by the wheels he is driving…