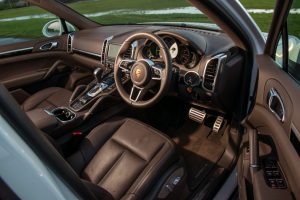 I’d never buy a car with scuffed alloys. So it pains me greatly when I give back a car with damage to the wheels. It smacks of typical motoring journalist – careless in everybody’s car apart from their own.

It wasn’t entirely my fault (it never is!) but I must bare some of the responsibility for the Cayenne’s grazed knees. A head-on meeting in an Edinburgh street that nudged me into the cobbled curb. Ouch.

Annoying as it is, the Porsche’s ‘restyling’ comes nowhere near what happened to a Range Rover I drove to France in the early 1990s. We had four expensive mountain bikes on the roof and the service station canopy was obviously way too low.

Fortunately, I wasn’t driving but it fell to me to call the Land Rover press office and explain myself. The damage was extensive but nobody batted an eyelid. Let’s hope Porsche are as understanding…