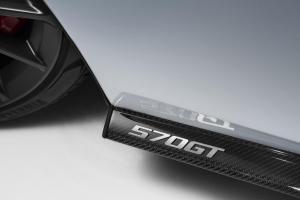 I’ve just returned from a two-week tour of New Zealand – organised by McLaren it was for owners from around to world to gather and celebrate the life of company founder Bruce McLaren.

They came from as far afield as Hong Kong and California, enjoying some of the best roads in the Southern hemisphere.

There were plenty of models on offer but I became unreasonably attached to the 570 GT. It may weigh some 35kg more than the standard 570S but that’s because McLaren has added some rather lovely extra standard equipment.

That includes a leather trimmed load area and a glass roof. Perhaps more importantly, McLaren has retuned the suspension to offer a more comfort-orientated set-up for GT adventures.

Even the quieter exhaust system makes for more enjoyable long distance travelling – and that opening rear screen also increases luggage capacity by 90 litres to what is already available under the bonnet.