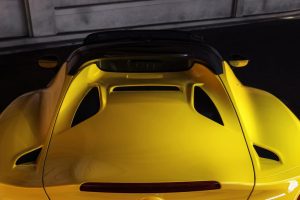 Every school probably had one – a teenage thug who liked to pick on the little kids. Mine was called Skibinski. He was intelligent but could flip at the opening of a pencil case.

Skibinski was a wild child. He was mad, bad and dangerous and liked to administer punches to the back of the head – as well as offering a school ear-piercing service with his compass.

The 4C is the Skibinski of sports car. It has a Jekyll and Hyde character which requires careful handling. Tweak that accelerator too much and you’re going to open a real nest of vipors.

Few cars have demanded more respect in th last 12 months. The Lamborghini Huracan, McLaren 570S and Morgan Plus 8 were all considerably easier to drive and as much fun.

But the breathtaking looks and unpredictability of the 4C will tempt enthusiastic drivers every time. It’s a car for purists but not necessarily connoisseurs.

A total enigma from the moment you turn the key…