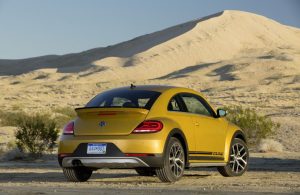 It started with the Chrysler PT Cruiser. There was much excitement at the press launch of this retro people-carrier but then a collective sigh of horror after we had driven it.

How could something so cool be such a terrible drive? BMW later nailed it with their Mini but somehow VW has missed a massive opportunity with the latest Beetle.

The styling is fantastic and this Dune model turns heads – so why is it lifeless behind the wheel? It’s all the most perplexing when you consider the brilliance of the Golf, or the Jetta, with which it shares the same platform.

It’s brilliant as a fashion statement but the drive is less than engaging – espeically with the DSG automatic gearbox that works so well in other VW models.

And then there’s the price. Perhaps it’s no wonder my Dune test car is turning so many heads – it’s such a rarity. Nobody is prepared to pay £25k upwards to own one…