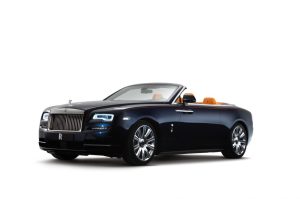 It’s not Rolls-Royce’s fault they called it the Dawn. How were they to know I once had a ‘difficult’ girlfriend with the same name.

And just like the naming of your new puppy, you won’t give it a moniker that reminds you of somebody you don’t like. Which rules out quite afew names, actually.

So, a weekend with the Dawn. Relaxed, comfortable driving sat on a well plumped pillow. Serenely peaceful in the cabin – apart from a glovebox that pops open on harsh bumps. Why is that?

I’ve actually been tootalling around at about 55mph. Not to save fuel (17.9mpg so far) but because you just don’t need to travel any father.

And it’s a car that commands respect too – until anything from Porsche or BMW.  Provided you don’t drive it like a knob, people seem to part out of your way. Lovely.

It may be the smaller Roller but it’s still mighty big to handle around town. Rerversing can be a nightmare with restricted visibility. I ended up relying totally on the cameras.

A lovely car for wafting about in. And about as British a feeling as you can get in any car these days …