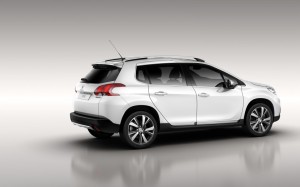 You know that feeling on a dual carriageway when you move out to overtake and realise the power just isn’t there? That happened today when  the 92bhp 2008 just didn’t have the legs to get past a lowly old Volvo.

I can’t say our 1.6 diesel feels sluggish around town but at motorways speeds, you really need the 115bhp model – or the 1.6 VTi petrol that produces 120bhp.

The 2008 isn’t a car that I’ve really warmed to yet. It feels more like a small minibus than an innovative, mini estate that will fulfil the motoring requirements of Peugeot’s global family.

It just doesn’t have enough going for it to put it above the crowd of urban crossovers out there, like the funky Renault Captur and the bug-eyed Nissan Juke.

A car like this needs more than a crazy interior headlining and a rather annoying aircraft-style handbrake lever.