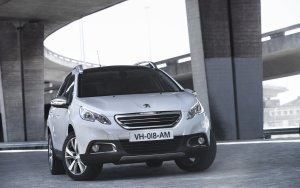 One of the Australian branch of Jessica’s extensive family is in England at the moment. Young Freddie is a twentysomething chap who lives in Perth and works out his fuel economy in miles per kilometer. What better person to cast a youthful eye over the 2008?

I have to admit, I truly thought Freddie would dismiss the Peugeot at first glance – after all, he’s used to driving proper 4x4s and utility vehicles. But surprisingly, Freddie seemed to like the pseudo off-road image of the 2008.

Australian’s also aren’t used to stop-start engine technology, designed to reduce emissions and improve fuel economy. I suppose that’s because once you are out of an Australian city, you don’t have to stop very often.

Freddie was pretty amazed by the 67mpg we managed in the Peugeot today, although we couldn’t quite work out what it was in kilometres.

The 2008 is continuing to go up in my estimations too. It feels more comfortable on the road than the Nissan Juke and there is less wallow on fast corners. I think noise levels and general refinement would improve with a six-speed gearbox and the larger diesel engine – otherwise it should be on your list to test drive if you are searching for a crossover vehicle.

Freddie won’t be buying one though. He couldn’t fit his surfboards in the back.