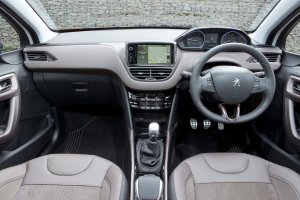 If you have a tape measure to hand, here’s an interesting statistic. The Peugeot 2008 is 20cm longer than the 208 supermini. I mention that because the 360 litres of space in the rear is a lot more than the profile of the 2008 suggests.

And what gives the 2008 the edge over other crossover vehicles is the low loading lip. I was up at Longleat forest this morning, buying supplies of wood for the winter. As brilliant as my old Land Rover is for carrying large bags of wood and coal, you do have to swing the sacks high to get them into the rear. The Peugeot is granny-friendly in that respect at least.

And while we are on the subject of practicality, the 2008 somehow manages to seat three, tall adults in the rear too, with a decent amount of legroom as well.

Less encouraging is the lack of storage in the centre console. There is a large space that takes a bottle of water behind the handbrake but the two cupholders are useless because of their positioning under the dashboard. A smaller tray for keys is also made inaccessible by the handbrake!