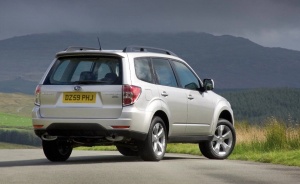 The best two words to sum up the Forester? Rugged and reliable. Yes, if you want chrome tailpipes and fancy stuff, go buy a Ford Kuga. You’ll regret it in the long run if you hanker for an SUV that actually does what it is meant to do.

There are times when I wish the Forester had a bit more style but I’d really rather  go for substance when buying a four-wheel drive – especially one that is obviously built to withstand whatever you can throw at it.

The 2013 version is a little noisy when pushed hard under acceleration but we’re still managing 42mpg in everyday use. This is helped by the six-speed gearbox, which is surprisingly slick for a chunky estate.

OK, so it doesn’t go around a corner with the poise of a Honda CR-V but the chances are you will be carrying a large dog, or a couple of sheep in the back anyway.