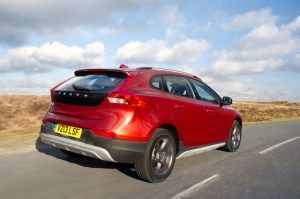 I have a problem with things that pretend to be something they are not. Cars with paddle shift gear change which are really family hatchbacks, 2+2 coupes that have no rear legroom at all, and seven-seat MPVs that are only suitable for elves, or very small mammals.

And then we come to cars that look like SUVs but actually have no off-road capability at all. It probably started with the Rover Streetwise and let’s hope it ends with the Volvo V40 Cross Country.

I have to admit, the V40 Cross Country fooled me. Even the Volvo website suggests 4×4 ability with the offer of all-wheel drive ‘available’ on this model. It is – but only on the top of the range petrol version for around £35,000. Are you going to pay that or opt for a two-year-old Range Rover Evoque I wonder?

You certainly can’t buy a diesel-powered all-wheel drive V40 – that won’t be available until around 2016 when the XC version is launched.

So, all that plastic trim to beef up the car’s image and make it look more robust is just for show – you are paying a £1000-plus premium for no off-road ability at all.

Volvo isn’t the only manufacturer to offer this, Nissan, Kia and several others all do the same. Which makes that secondhand Evoque look even more attractive…

Might Santa choose a Volvo V40 Cross Country as his delivery vehicle? It may be built in Scandinavia and therefore tick the loyalty box but we reckon the man in red would select a vehicle with four-wheel drive, rather than being just a lookalike.

No, SC would require something fast, good in all weathers and with a decent amount of luggage space too. The obvious choice would be a Range Rover Sport – lashings of reindeer power and brilliant in the snow. Or what about a Mercedes G-Class? Both a tad bling perhaps?

A Bugatti Veyron would be able to dash around the world at speeds in excess of 200mph, although constant fuel stops would be required and space is tight. A seven-seat MPV doesn’t go with the image, while the Fiat Panda 4×4 has loads of street creed but might be a little uncomfortable over the rough stuff.

No, after serious consultations with Mrs Claus, we think there is only one car that is guaranteed to get the job done and in style. It’s exclusive, fast, boasts four-wheel drive and is usually provided in a colour to match his work clothes. Yes, it can only be the wildly untamed Ferrari FF.

Seems strange swapping a Kia for an Aston Martin but they’ve both been on the driveway at Car Couture today. Suffice to say that returning a creditable 39mpg during the week, the Sportage is slightly more economical.

And it’s also a very good family car, if you are in the market for a roomy estate with the added benefit of four-wheel drive. We found a large boot, with easy drop backseats meant the Kia was remarkably versatile.

In the rear, there is a generous amount of leg room, which compares well to rivals like the bug-eyed Nissan Qashqai and the popular Ford Kuga.

Some of the interior trim in the Kia is less than special but this is an awful lot of car for the money. Avoid the petrol versions and go for a 2.0-litre diesel – it has all the power you will need for everyday motoring.

I can’t help but compare our 911 to the Jaguar XKR-S we tested earlier this year. While the Big Cat has a much bigger engine, the Porsche feels more refined, agile and surefooted on the road – probably thanks to its smaller body dimensions and the addition of four-wheel drive.

For some reason, I’ve also found the 911’s seven-speed manual gearbox a bit tiresome around town. It’s not just the heavy clutch but using sixth gear and has become a bit of a struggle for me. I can only describe it as similar to looking for the gate to a reverse gear – tricky at high speed!

I thought the seventh gear would be fairly redundant in a car like this but you can cruise along a congested A-road in top gear with the engine still responding to the slightest tweak. A remarkable engine, it’s barely audible at cruising speeds, even with the sport exhaust in operation.

There still hasn’t been a chance to lower the hood, every time the sun comes out today it seems to be followed by a cloudburst! The acoustics of the hood are so good, I’ve almost forgotten this is a convertible… 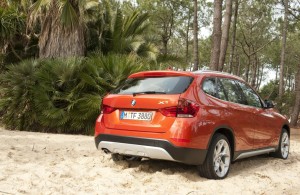 The X1 has just been collected and it turned out to be a lot better than I had expected. I say that because I couldn’t see the point of a premium brand mini SUV  – especially one without four-wheel drive like our test car.

Solid, classy, refined – but then you wouldn’t expect anything else from a BMW, would you? The X1 is another chip off the BMW block, although some of the plastics inside the cabin are a little below par for the German brand.

The X1 drives more like a hatchback than a sports utility vehicle, which will appeal to buyers who don’t want a high-seat position and ponderous body roll on cornering.

It’s very easy to live with and feels very safe too – no wonder it picked up a five-star NCAP rating. All X1s have six airbags, stability control and Cornering Brake Control.

I’m now wondering if I would actually opt for the xDrive, four-wheel drive model. The sDrive rear-wheel driver series we drove has exceptional fuel economy and feels surefooted enough.

That said, if you want something to cope with a snowy lane in winter, opt for the xDrive. Our test car might look like an off-roader but the sDrive is exactly the opposite! Choose your model carefully… 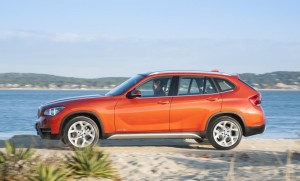 Yes, it’s true, I did. And it wasn’t in a bad way. Just a little white lie because I couldn’t own up to my rufty-tufty X1 NOT being a four-wheel drive.

I was filling up in Oxfordshire this morning when a woman in a Toyota RAV4 asked me if I liked my new BMW. She was looking for a replacement for her SUV and thought the X1 looked the perfect solution.

She lived on a smallholding near Chipping Norton and needed ‘something 4×4 for the lower field’ – whatever that means. Anyway, she wanted to know what the X1 was like on a muddy track and I just couldn’t own up to driving a car that looked like a four-wheel drive but actually wasn’t.

I advised her to avoid the two-wheel drive version (which is true!) for her muddy exploits and suggested the 4×4 model would be very suitable, if a little more thirsty.

I also raved about the driving experience, the beautifully crafted interior and a decent-sized boot. Which was all true too…

The Saturday morning run along Wiltshire‘s Great Ridge almost came unstuck today. Not because of the large number of shooters out, or the horse that spooked my dog. No, I just completely forgot that this X1 isn’t four-wheel drive.

So when I parked on the slippery bank, about 100 yards down a farm track, I didn’t take into account the ‘BMW Factor’. As everyone knows, rear-wheel drive Beemers are just rubbish on anything other than tarmac. Really rubbish.

My 6 Series refused to budge on a virtually flat track in the Cotswolds last winter  – an older 3 Series Touring was even worse, unless you chucked a couple of bags of coal in the boot.

My problem with any car that looks like a four-wheel drive is that it SHOULD also behave like a 4×4. What’s the point of paying for all that extra ground clearance if you can’t even pull away smoothly from a grass bank?

So while our xLine X1 is loaded with £5,000 of extras, I’d ditch the lot and go for the four-wheel drive model. Then I could park on grassy banks without any worries.

The best two words to sum up the Forester? Rugged and reliable. Yes, if you want chrome tailpipes and fancy stuff, go buy a Ford Kuga. You’ll regret it in the long run if you hanker for an SUV that actually does what it is meant to do.

There are times when I wish the Forester had a bit more style but I’d really rather  go for substance when buying a four-wheel drive – especially one that is obviously built to withstand whatever you can throw at it.

The 2013 version is a little noisy when pushed hard under acceleration but we’re still managing 42mpg in everyday use. This is helped by the six-speed gearbox, which is surprisingly slick for a chunky estate.

OK, so it doesn’t go around a corner with the poise of a Honda CR-V but the chances are you will be carrying a large dog, or a couple of sheep in the back anyway. 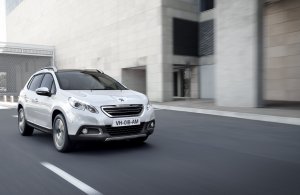 The very thought of using a two-wheel drive car effectively in mud, sand and snow is a tough one to get your head around. That’s especially true if it’s a modest family estate from Peugeot with model names live Active, Allure and Feline!

This week I’ve been trying to find some suitable ‘dirt’ to put the 2008 to the test. There’s a long, rutted track that I use to run down near Warminster and so I’ve used it to try out the car’s Grip Control dial.

The system is designed to maximise traction in low grip conditions. It adapts the 2008 to the terrain – just like a traction control system on a ‘proper’ 4×4.

My off-road route isn’t blessed with sand and snow (yet) but in mud mode, the 2008 scrambled along with remarkable agility, even if the rear end wandered a little in the process.

If you want a full-on four-wheel drive car, there are plenty to choose from. But let’s face it, how often do you actually use 4×4? It’s such a long time since I slipped my Land Rover into four-wheel drive that when I do, I have to read the instructions first!

So, for occasional, light off-road use, the Peugeot 2008 shouldn’t be written off as just a tame estate car pretending to look macho. It also has the benefits of remarkable fuel economy – something you won’t find in a full-time 4WD.