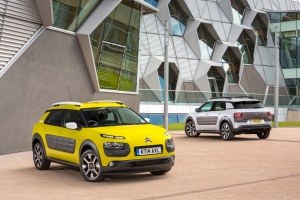 Those of you that are still growing hair probably don’t remember cars that had a bench seat up front. Imagine that – one enormous seat that stretches from door to door!

Back in the sixties, cars like the Ford Consul and Zephyr were equipped with such luxuries. There were rarely safety belts, so you can imagine the consequences of sitting a child between two adults in the middle.

The Cactus can be tweaked up to have a bench seat too, although it’s definitely not for a third passenger. It’s just one of several quirky features inside the car that raises an eyebrow.

Others include leather strap door handles and a minimalist dashboard, with most functions controlled from the touchscreen unit. It all works beautifully, except for the driver’s seat, which seems to have restricted for-art adjustment. No idea why but it even makes me feel ‘tall’ at 5ft 10ins…