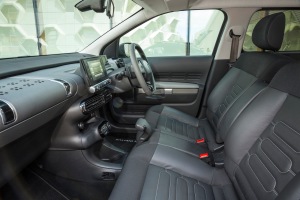 Funky, French and fun – not your dream girlfriend but the new Citroen Cactus. As Car Couture waves goodbye to another test car today, there’s no doubt this unusual crossover is going to be a massive hit in the UK.

The appeal goes way beyond those padded air cells on the doors too. This is a car that dares to be different and most importantly, it’s well within reach of many new car buyers.

The futuristic design also gives a big hint of what we can expect from Citroen over the next five years. It won’t be to everybody’s taste but Skoda, Ford and Vauxhall should be running scared.

We think it needs a more sprightly engine but perhaps a lukewarm version is on the cards. For now, the Cactus is going to give mainstream car makers a spikey wake-up call…