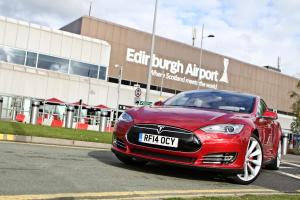 There’s something very relaxing about driving a car with as much straight line power as the Model S. Blip the throttle and the Tesla takes off like a scalded cat. It’s quicker than just about any saloon and with no accompanying engine roar is eerily silent too.

I’m just getting to grips with a car you expect to tootle around slowly in – just because it’s electric. Of course, the Model S has a mighty turn of speed and isn’t just about charge times and cost savings.

Tesla claim a 4.6 second 0-60mph time but you can upgrade the motor and cut that down to 3.2 seconds. Consider the rocket-propelled Nissan GT-R takes 2.8 seconds and you might start to understand why the Model S is such a good car.

The Model S can’t sustain flat out performance for long before the motor’s safety mode kicks and reduces power automatically. But in real-world driving, it has more than enough shove to put a Cheshire cat smile on your face.

Being such a large vehicle, handling isn’t as sharp on corners as a supercar Merc or BMW  – plus the power regeneration when you take your foot off the accelerator takes a little getting used too as the Tesla slows down at an alarming rate.

Overall, the Model S is great fun to drive in town or on a country A-road. Just get used to the looks because it has serious celebrity status…