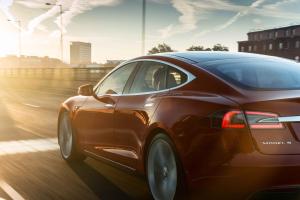 I hate motoring economy drives – they used to be all the rage, as manufacturers fought to prove their car was the most frugal. Hacks queued up to drive from one end of the country to the other on an eggcup of fuel.

Competitors would remove the windscreen wipers and fold in the door mirror to reduce drag, coast down hills and drive at 55mph to maximise fuel economy. It was bloody dull and most probably dangerous too.

Now you don’t have to do any of that to get massive miles-per-pound in the Tesla. The annual running costs for somebody travelling 15,000 miles a year is roughly £500 – £2,000 less than a fossil fuel car.

However, I’m constantly watching the mileage range – always living in fear that I might not have enough to get home and to the safety of a three-pin plug. There are charging points around the country but even if one is near my route, I don’t want to be stuck there for an hour just to squeeze in a 70-mile charge.

It’s the Tesla’s Achilles heel – as brilliant as the car and technology are, you do worry about simply running out of power. Tesla would argue otherwise but living in the Cotswolds, home is the only realistic option for charging the car.