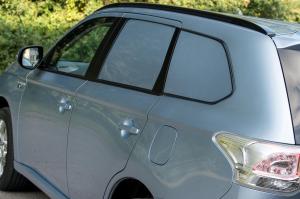 You might think your fuel bill is going to be slashed driving a plug-in hybrid like the Outlander PHEV. The headline figure of 148mpg sounds astounding – although common sense suggests you will never achieve anything like that in the real world.

So, what can you expect from Mitsubishi’s much-praised PHEV – 100mpg, 80mpg or a more realistic 65mpg perhaps? I’ve just driven the Outlander on two high-speed motorway trips of around 180 miles each way and the depressing news is 28.1mpg and 31.2mpg!

I was totally gobsmacked. There wasn’t even Easter Bank Holiday traffic to contend with, yet the PHEV was actually far worse than many premium band SUVs. Even the BMW X5 xDrive 25d managed 40+mpg.

And the problem is compounded by the fact that the PHEV only has a 45 litre capacity fuel tank because space is lost to accommodate the batteries. So you can forget Mitsubishi’s claimed 500 miles plus range – it just isn’t going to happen however carefully you drive.

The PHEV is competitively priced but I’m afraid that despite the hype, I’d still opt for a diesel version and enjoy much better, more practical economy…

One thought on “So the Mitsubishi Outlander PHEV plug-in hybrid does 148mpg? Oh no it doesn’t! Welcome to the real world”