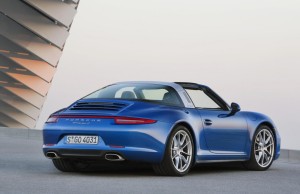 The buzzing Targa continues to frustrate but I’m managing to block out the sound. It helps if the weather is sunny because I can drop the lid and listen to the wind instead.

Although the folding section of the roof is made of black fabric (a la most convertibles) it could just as easily be make out of metal. Tat’s because it doesn’t crumble up, but disappears in one piece underneath the opened rear glass screen.

Yes, it’s rather hard to describe in words but it words beautifully. It’s not quick but sometimes the best things are worth waiting for.

Once removed, the latest Targa model looks simply beautiful. I thought the shape was too similar to a standard 911 coupe but you would be amazed how many people comment positively on the styling.

The Targa offers so much more than the convertible 911. It may cost more (and be equally as rattly!) but what a head-turner…