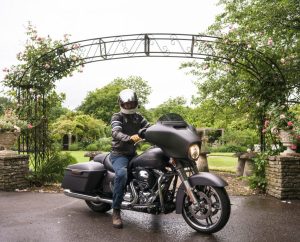 July 16 Like most teenagers in the 70s I hankered after a motorbike. Insurance was cheap and cars expensive – it was the first ‘grown up’ decision for a 17-year-old, which motorcycle to buy.

Back then it was a toss up between the Honda 250 Superdream and a Suzuki 185. A few months later, as I picked my Suzuki out of a hedge and was transferred to hospital, my biking days had been cut short before they really got started.

And now I’m back in the saddle again as a born again biker. I passed my test on a ‘crash’ course six years ago and Harley Davidson has provided the machine to take me back to my ‘yoof’.

The difference now is that I’ve been seduced by the comfort of cars for the last 35 years. So even with all my Nevis wet weather kit (www.nevis.uk.com), riding a bike in crap weather is a chore.

This summer hasn’t been great either but the Street Glide has the ‘bat wing’ fairing which does keep a lot of the weather off. Instead of the Sex Pistols pounding from the two-speaker dash I’m listening to Coldplay. How I’ve mellowed…

I still won’t wear the bandana though. Nope, you’ve really got to be a tosser to own one of them.