Infotainment screens – millions of them. Ugly, flat devices that destroy the aesthetics of any car interior. Most are as unattractive as any flat screen TV.

Now it seems to me that some car manufacturers think displaying a large screen is a status symbol. Mercedes being a very good case in point in last week’s AMG GT S.

So what joy to discover the SQ7 system disappears without fuss into the to of the dash when not needed. The operation is kind of cool too – glides down silently at the tap of a button.

Which is why for my money, the Audi dash is so much better than anything else coming out of Germany right now…

So what have I learned over the weekend about the SQ7? Well, it’s one of those cars that is so smooth and quiet, you could easily gain a point or three.

There’s no fuss about the performance, no acoustic exhaust button or fancy spoiler. It’s not pretty but for moving seven people in a hurry, this is some machine.

There are different drive settings. Economy is quick enough but dynamic really ups the revs and gives this big Audi a serious turn of speed.

The steering is light, which means bundling fast into a corner could make lesser cars come unstuck. Not the SQ7 – it grips like a Golf GTI.

And there’s a subdued grumble from the four tailpipes – so refreshing after the rather manufactured roar of many rivals.

I don’t have seven people to move around, or need a car this big. But I could find a reason if it meant keeping the SQ7…

Technology was never my strong point. Once, I almost blew up the science lab at school. I’m still struggling with the three remote controls that make my television work.

So trying to get my head around ‘forced induction’ was never going to be easy.

As far as I can work out, that means the SQ7 has something more than the standard twin turbochargers fitted to most high performance cars these days.

Somewhere down in the depths of that engine is a system called EPC, or electric powered compressor. It completely eliminates turbo lag – that split second in a turbo car when you press the accelerator and nothing happens.

In the youth of my driving career, turbo lag was an absolute pain. It still happens in many modern cars but nowhere near as bad.

Audi has solved the problem in the SQ7 – albeit with technology I will never understand. It’s brilliant but beyond my Grade U maths brain.

What it does mean is that I can pull out during overtaking without fear of being mushed. Which has to be a good thing… 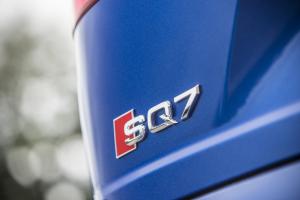 First things first, the SQ7 is fast, mighty fast. That’s extra surprising because it’s so damn quiet, even at motorway speeds. It’s like a cut-price, souped up Range Rover, only not as cute.

Scratch the surface though and there is plenty of technology packed inside. The engine management system borrows from F1 and you even opt for adaptive anti-roll bars on the chassis.

The SQ7 can still lean into a corner but chances are, you will lose your nerve before it does. Anyone in the back row of seats will likely throw up too.

I can report that on a drive back from London this morning, I averaged 38mpg. That’s fairly astounding considering how large and powerful the SQ7 is…