For once I seem to be in the right test car for the weather conditions. Usually I have a rear-wheel drive BMW for ice (appalling), an MX-5 two-seater to go on holiday with a passenger AND dog (tight), or a bog standard saloon on a hot day when a convertible would be perfect (boring).

The point is that even with the keys to a candy shop of cars, it’s difficult to plan ahead and choose the right one. In Britain, spring can be a snow-fest, or a mini scorcher. It’s the only good reason to live by the Med, where the weather is always the same.

Which is probably why in 2015, car buyers seem to want multi-purpose vehicles that do everything. A one-size-fits-all, off the peg motor that takes every day in its stride, and whatever you throw at it.

While the XC60 is never going to set your pulse racing, it’s a brilliant family SUV. Fortunately, I don’t have a family to ship around, so I can admire it from afar, tell my friends it’s perfect for their kids – then go and buy an inappropriate Maserati instead….

I keep wondering what Wilf Self would make of the family-orientated XC60. The acerbic writer has been presenting a programme on Radio 4 about walking around the large harden collider at Cern, near Geneva.

If ever there was a man designed to drive a cool, old Mercedes saloon, it is Self. I could more imagine him flying a space shuttle than helming a Volvo (although an ancient estate might fit the bill too).

There is nothing cool about the XC60 – even with the 20-inch Ixion alloy wheels fitted to out test car. Not even the red paintwork raises it above ‘normal’.

But what the XC60 does have is all the qualities required in a family SUV. All-wheel drive, a huge boot and every conceivable piece of safety equipment.

So, if you’re an aspiring Wilf Self buy an old Mercedes. The rest of us might prefer a rock steady Volvo…

It’s not an illusion – cars have grown bigger over the last few decades. A 1980s VW Golf looks tiny next to the modern version – suddenly size matters.

I parked the XC60 by an Audi today and was convinced it was the medium-sized Q5 SUV. It turned out to be the Q3, although it was virtually the same size as the Volvo.

Looking at the XC60 parked outside now, I still can’t tell you whether it’s a big car or not. It is compact yet the Volvo could easily cope with a family of five and all their luggage.

Perhaps the motor industry will build smaller cars again in the future. I’m all for downsizing but we now expect our ‘lifestyle’ vehicles to do everything. And that usually means bigger is much better… 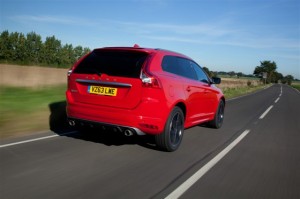 Spacious and classy, the XC60 is a machine that Volvo fans could only have dreamt about back in the 1990s. In fact it’s weird to think the manufacturer only started making four-wheel drive cars about 11 years ago.

Now with a line-up that includes the all-new XC90 and assorted other soft-roaders, there seem to be more Volvo 4x4s than standard models out there.

After stepping out of the V70, the XC60 feels much more up-to-date and refined. The D4 engine is smooth and quiet and is already returning 36mpg, despite power going to all four wheels.

It also has amazing front seats, big and comfy with lots of support. Less impressive is the six-speed manual gearbox. After the V70’s slick auto box, it feels pretty clunky…

I feel like a bit of a fraud driving the XC60. Mainly because I don’t have a family and my hound, Malin, is just as happy on the front seat of a Porsche Boxster as a thumping SUV.

If I was in the family way, so to speak, then the Volvo would be worthy of serious consideration. Which considering I would never have been seen dead in a Volvo estate ten years ago is quite some achievement!

Just like Germany’s magnificent seven against Brazil, this is something of a surprise. I’ve enjoyed it more than Audi’s Q5 and it packs an awful lot more equipment than the BMW X3 too, although it doesn’t drive as well.

Cosmetic changes to the XC60 last year have improved the Volvo still further and I reckon it has the most comfortable seats of any car I’ve driven this year, Bentley included. Yes, the 2.4 diesel engine is a little noisy and the array of safety devices can sanitise the fun but this is an excellent family SUV.

Sensible yes but a worthy rival to German premium brands…

It’s 12 years since Volvo launched its first SUV. The XC90 was incredibly good, which is one reason why the new version doesn’t appear on the market until later this year. Why change a winning formula?

After the success of that car, Volvo put its foot to the floor and produced a whole raft of chunky-looking sports utility vehicles. Last year’s facelift to the XC60 has helped create a car that will fit perfectly into your family life.

And one key reason why buyers opt for the Volvo over other premium brand SUVs is the cabin. It’s not just well-built and an ergonomic joy but simply beautiful to look at too.

Comfortable, refined and very classy, the XC60 may not be as exciting to drive as a BMW X3 but as a package, it’s a whole lot better…

I’m just back from five days riding a motorbike around Spain. The Spanish are ‘enthusiastic’ drivers and equally nuts in a car. However, they are particularly bad at dipping their headlights at night, which is annoying and dangerous if you are the oncoming motorcyclist.

What Spain needs is more XC60s. Why? Well, Car Couture’s test car is fitted with a system called Driver Support Pack. It’s a £1900 extra but probably the most advanced lighting system I’ve ever used.

The XC60 has sensors that continually monitor for blind spots and oncoming traffic, then adjust the headlights accordingly. Lots of other cars have this type of system but the Volvo one is so advanced, it’s constantly changing the headlight beam projection with the movement of the vehicle.

My favourite is when you follow a car and the Volvo system cleverly dims the lighting area that would have otherwise blinded the motorist in front. The main beam stays active on both sides of the car in front.

Does it work? Yes it does but Driver Support Pack takes some getting used to. My eyes started following the beam, rather than the road on several occasions. Clever but whether it is worth you hard-earned £1900 might be another issue…

Remember the wedge-shaped Volvo 480? Not many people do but back in the mid-eighties, this sleek four-seater was seen as radical. It was a total break from the norm for a company that produced lumpy estate cars with the aerodynamics of a brick.

Apparently, the 480 was designed many years before by a man who was almost hung, drawn and quartered by his Swedish bosses for suggesting something so outrageously different. Hell, this was Volvo and we don’t do sexy! Volvos were designed soley to carry sofas, while being capable of hitting an elk at 60mph.

Well, that’s all changed and for further proof, just Google the all new Polestar models that are the hottest Volvos ever built. Even the ‘everyday’ cars are pretty smart too. Just take a loot at the XC60. If you have to make the school run, then this is an SUV that your kid won’t mind stepping out of.

There’s not to much 4×4 ‘bling’ about the styling either, it doesn’t shout about it’s four-wheel drive credentials. Yes, it’s taller and more butch than your average hatchback but if you want a Volvo that is a tiny, weeny bit sexy as well as practical and safe, this is it…. 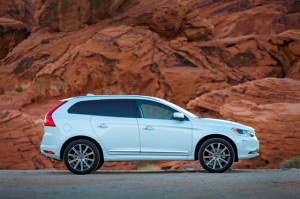 Volvo will replace the hugely popular XC90 later this year – the giant SUV was the family car that really turned things around for the Swedish car maker. But if you want a taste of what the next generation model will be like, there are plenty of clues in the current XC60 we have on test.

The smaller XC60 has rugged, robust looks, wrapped up in a stylish bodyshell that holds it own against the likes of BMW and Audi. At £36k, it has too because top spec Volvos aren’t cheap these days.

The XC is available with either front wheel, or all-wheel drive, so unless you need mud-plugging ability, save cash and buy the former.

As you would expect, the XC60 is equipped with every piece of safety equipment you might imagine. That includes lane departure warning and a light in the door mirrors that warn you if a passing car is going through your blind spot. It probably has an alert for farting passengers too but I haven’t found that yet.

More tomorrow when I have learnt how to open the windows…

Jeremy I’ve just driven the XC60 across the Cotswolds on what could possibly be the first day of Spring. SItting in the office, there’s a glorious sunset sinking over the bonnet and my log fire seems strangely out of place, for the first time in months.

My first time behind the wheel and I’m still getting used to all safety kit in the XC60. This is a car just bristling with technology which I have yet to get my head around. I’m not sure it’s as pretty as a Range Rover Evoque but on first impressions, the Volvo is bolted together just as well and has a more practical interior.

Around these parts, every other car is a 4×4 and the XC60 certainly doesn’t look out of place in the supermarket car park. It may not be as big as a BMW X5, Audi Q7 or the new Range Rover but less is more these days, isn’t it?

So far, so good in the XC60 anyway. Looking forward to getting back behind the wheel tomorrow..