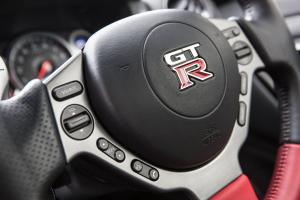 The motoring world is divided between those who have driven a Nissan GT-R and those who haven’t. My last ride in an equivalent  Nissan was in the old Skyline – a fearsomely quick supercar that was more bling than a rapper’s jewellery drawer.

In lots of ways, the GT-R is just a grown up version of that legendary Skyline. It boxes well above its weight but still has the visual appeal of a rusty Mondeo. In dark blue.

Whether anybody with £78,000 to spend on a car would choose the GT-R ahead of a Porsche 911, or even a secondhand Aston Martin, is debatable. I do know there are people out there who wear gold ID bracelets and insist on owning a personalised number plate.

On a racetrack the GT-R is quite simply, the best. However, if you have an ounce of aesthetic sensibility in your body, this is not the car to be seen in on the High Street.

Well, there was Damon Hill’s old Arrows F1 car but that wasn’t on the road. No amount of Ferrari or Aston Martin madness comes close to the shove in the back created by the Nissan.

I know that I would stain my driving license with points pretty swiftly if I owned a GT-R. It’s not just the 0-60mph dash in 2.8 seconds, the power just keeps on coming from the 3.8 bi-turbo.

But what makes the GT-R so remarkable is that is serves up all this grunt in a very civilised way. Although you are hurtling towards oblivion with just a blip of the right foot, the Nissan feels rock solid on the road. There are no pointless buttons to make the exhaust sound prettier, it’s not a luxurious gentleman’s club in the cabin and the GT-R doesn’t come with a handcrafted key fob make from virgin foreskin.

No, the GT-R is just very bloody fast and you should try and drive one before you die – even if it does return under 12mpg when angry…

Audi launched the original TT more than 15 years ago. Remember the fuss about the rear spoiler? Apparently, there were a couple of fatal accidents which were blamed on the car not sporting a wind-deflector on the boot. Without it the TT was allegedly unstable.

What happened next was a travesty. Audi allowed the profile of their beautiful coupe to be ruined by the ugliest lip spoiler you have ever seen. It looked like a spoiler that had been designed by a five-year-old with crayon and paper. No wonder later versions of the car had a pop-up version that discreetly tucked away when not needed…

It was the ugliest spoiler – until Nissan slapped a luggage rack on the back of the GT-R. Friends with a more artist eye have already commented on the whopping wing. It looks quite ridiculous and does nothing for the shape of the GT-R.

Of course, when you are travelling flat out at 195mph in the GT-R you might be grateful for a device that keeps the rear end firmly on the tarmac. But with all that other technology on board, I wonder why a pop-up spoiler wasn’t the order of the day…

For all the snorting performance of the Nissan, the GT-R is surprisingly old fashioned in the cabin. I guess the real cutting edge stuff has been saved for under the bonnet, encased in a hand-built,3.8-litre twin turbo engine.

The steering wheel is a rash of buttons – probably too many to even consider if you are driving the GT-R with gusto – and a pair of elongated flappy-paddle gear changers that just add to the sensation you are travelling very fast indeed.

The entire instrument binnacle adjusts with the steering column, so you will never have any excuse for not seeing the speedo hit 100mph in just a matter of seconds. The seats are actually quite comfortable – I can even squeeze the dog onto the back seat.

The infotainment system is thoroughly entertaining, My favourite screen today is the one that shows G-force settings on acceleration and cornering! Surely every car should have one?

The best piece of advice I was ever given about driving a high performance sports car was never press my foot on the accelerate – just squeeze the toes.

I was driving a Maserati on the Ferrari proving track in Italy. At the wheel was an  elegant woman racing driver who steered the 3200 with a passion normally reserved for the bed chamber.

A memorable moment for many reasons but I digress. If ever a car demanded elegant squeezing of the toes it was the GT-R. Today I drove to the supermarket in Chipping Norton and tweaked the accelerator on a mini roundabout.

Well, you can imagine the consequences. Fortunately, the traction control and four-wheel drive sorted the problem out in an instant. But be warned, 550bhp on a wet day in a car like the Nissan demands the driving skills of a scintillating Italian racing diva…

Driving the GT-R up the main approach to Goodwood House today was like introducing a soap star to the Queen. We all know it’s going to happen one day but there’s still something rather vulgar about it.

Lord March’s latest money-spinner is a tie-up with BMW for a public on-road, off-road driving experience around his 12,000-acre estate. It was launched today in the dampest conditions I’ve seen in months. Some of the track driving was abandoned it was that wet.

Lord March, who looks remarkably similar to Hugh Grant these days, has the Midas touch at the moment. His Festival of Speed is second only to the British GP as the top motoring event in the country.

Surprisingly, the BMW engineers and mechanics were secretly itching to peep inside the GT-R. They had some electric i8s available and I would gladly have swapped. To put it bluntly, the Nissan looked like a fish out of water at Goodwood. Yet there’s no doubt it would destroy all the M5s and M3s we had available to drive.

And there’s the rub. The GT-R is a crowd-pleaser of epic proportions. But is it classy? I think not… 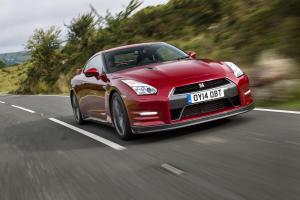 Tucked away in the small print, at the end of the GT-R press pack, are the official fuel consumption figures. Of course, you can take them with a pinch of salt because NOBODY can ever get anywhere near what a manufacturer claims is possible (Ford being the worst offender).

Urban 16.6, extra urban 32.1 and combined 23.9mpg. I usually slice 5mpg off combined to get something akin to real world driving, except the temptation to floor the accelerator in the Nissan will no doubt reduce that dramatically.

So when the vermillion red GT-R was delivered this morning, I was a bit shocked to read the on-board computer claiming 12mpg! Yikes, this is going to be an expensive week – especially as I’m heading down to Goodwood later for a BMW event.

According to the press pack, the official 0-60mph is 2.84 seconds, although again, just how I’m going to measure than on my wristwatch will be something of a challenge.

The GT-R is a monster, however you look at it. I hate the colour, so that doesn’t help. More late tomorrow when I’m emptied the tank. Twice. 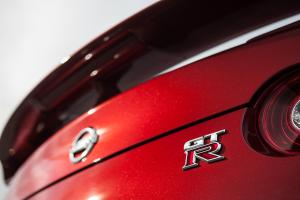 Well, yes, it should have been here last Thursday but some young hack has stuffed it. So Car Couture has been waiting patiently for Nissan’s outrageously fast coupe to land.

From Tuesday we will be steering a rocket that can accelerate from 0-60mph in 2.8 seconds – in the same league as the McLaren P1 and LaFerrari.

Despite a hand-built engine, it’s massively cheaper than both. What the Nissan may lack is the right badge on the bonnet.

Should that be an issues? If you like speed, of course not. Some would prefer the Jaguar F-Type for its historic cache but can sheer brute power be enough to persuade us? Find out from tomorrow, with daily reports every day…